So, At 40, I've Gotten Into Building Model Rockets For Some Reason

About a month and a half ago, I became obsessed with building model rockets.

Here's how it happened:

A year ago, I saw a kit at Target - what's called a "launch kit" - a beginner's model rocket set with everything you need - a launch pad, a controller and an easy-to-assemble model rocket. I got one of these when I was a kid, but I never put it together or used it, because when I'd tried to build models or... anything... as a kid, I messed them up. After seeing Top Gun, I asked my dad for a model F-14, and by the time I was done with it, it was a mess of glue blobs and badly placed stickers, and was just a wreck.

One Christmas, I got a bunch of themed gifts - a wire controlled airplane, a little bedroom ceiling planetarium, a telescope (which was good for not much), a huge model space shuttle (never built - see above), and a model rocket kit.

I loved all of these presents, but I never used anything but the planetarium, because all you had to do was insert batteries and turn it on.

So, when I saw this kit, I immediately texted my friend Chad.

Chad is the Artistic Director of the Bloomington Playwrights Project, where I do some acting, and he's a NASA geek. Like, way more than I am, and I love NASA.

"Dude, if I got some model rockets, would you want to launch them with me?"

Fast forward a year later. I hadn't bought any rockets, though I continued to think about it. I browsed around Target this year and found no launch kits. Oh, well...

Then, in early July, Chad texted me: "Got some rockets. Wanna launch?"

We went out on July 5 with about 5 rockets. This was way more fun than I'd thought it would be. We lost 3 to trees and crashes. But the launches were spectacular.

I thought I'd get myself some premade, cheap rockets to launch next time. I had no interest in building my own. I went online and found the same launch kit I'd gotten as a kid - the Silver Arrow, by Estes. This gives you the pad, controller, plus a free rocket for less than it would cost to buy the pad and controller by themselves. I managed to get the Silver Arrow together without too much glue trouble, although the stickers never ended up straight. Then I found some premade rockets at Michael's Crafts on clearance for between 4 and 7 dollars.

It could have ended there. But then, I found Der Red Max.

Der Red Max is a rocket by Estes - the most popular model rocket company - which is red and black, with skulls and crosses. It looks like the airplane of the Red Baron. It was not too expensive - about 17 bucks - and there was only one left in stock on Amazon. But it required some assembly.

This was a Skill Level 1 kit, which, in model rocketry terms, means it's pretty easy. Still, I was nervous about it. I'd have to glue some things together and keep them straight, and then I'd have to paint the whole thing, and apply decals. I was pretty sure I would screw this up.

I got the kit, and procrastinated for a while. But we had another launch day scheduled, so I decided, hey, I'm an adult. If a 12-year-old Webelos scout can do this, I can.

I followed the directions, and took my time, and the thing turned out pretty good. 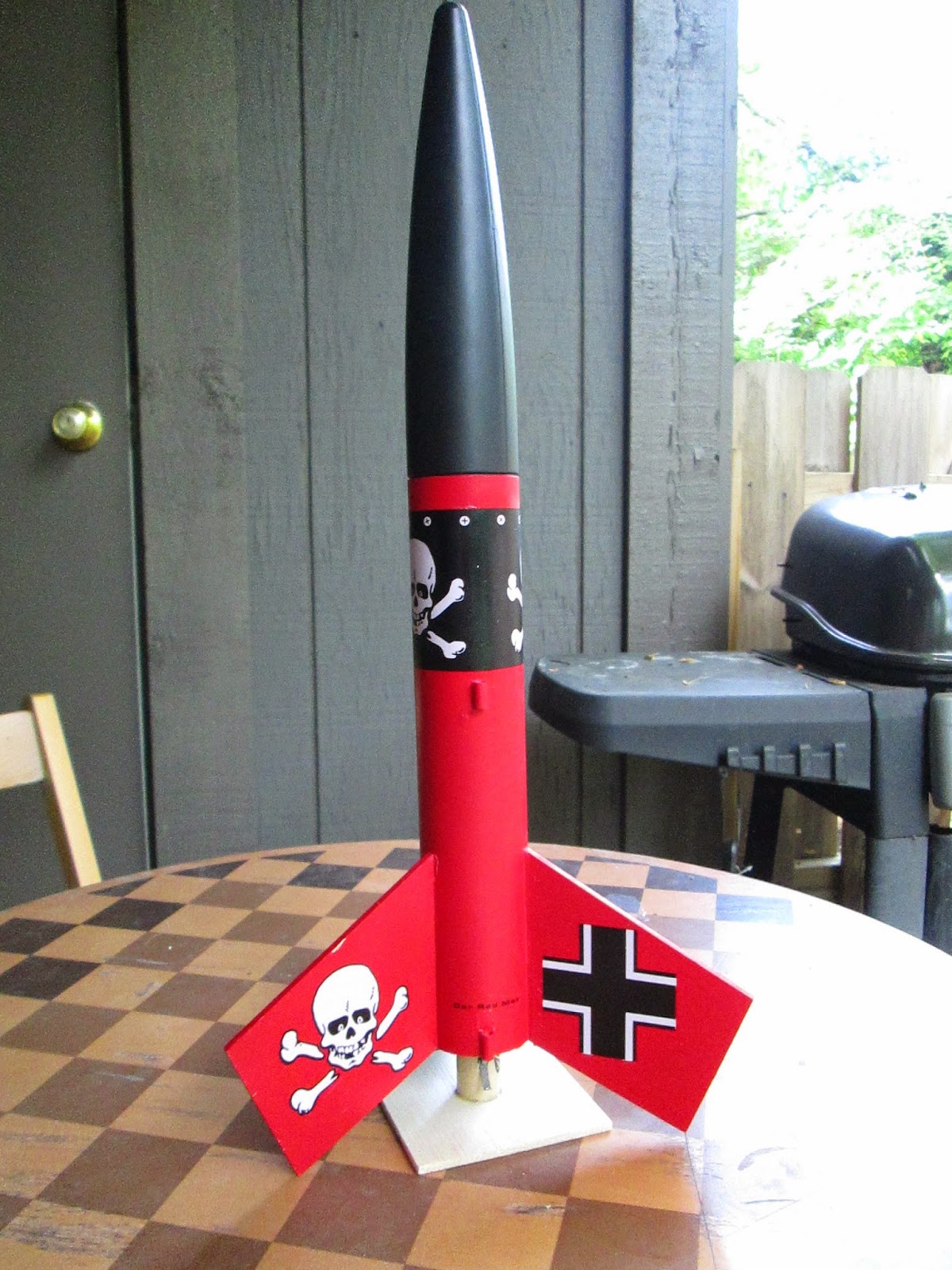 There was something so satisfying about putting this rocket together, and having it turn out like I expected it to. I became hooked, started looking for more, cool rockets, reading about rocketry, and getting involved in online rocketry forums and communities.

I started this blog about three weeks ago, but was too busy to post. Since then, I've learned a lot, and I'm working on my 4th and 5th rockets. This blog will be the story of my rocketry learning process.