For N00bs - How Does a Model Rocket Work?

Sometimes I tell people I've recently gotten into building and launching model rockets, they ask some interesting questions. "Do you, like, throw them away after you launch them?"

They're not supposed to.

Interesting question. Here are the basics for my fellow rocket n00bs - How Does A Model Rocket Work? 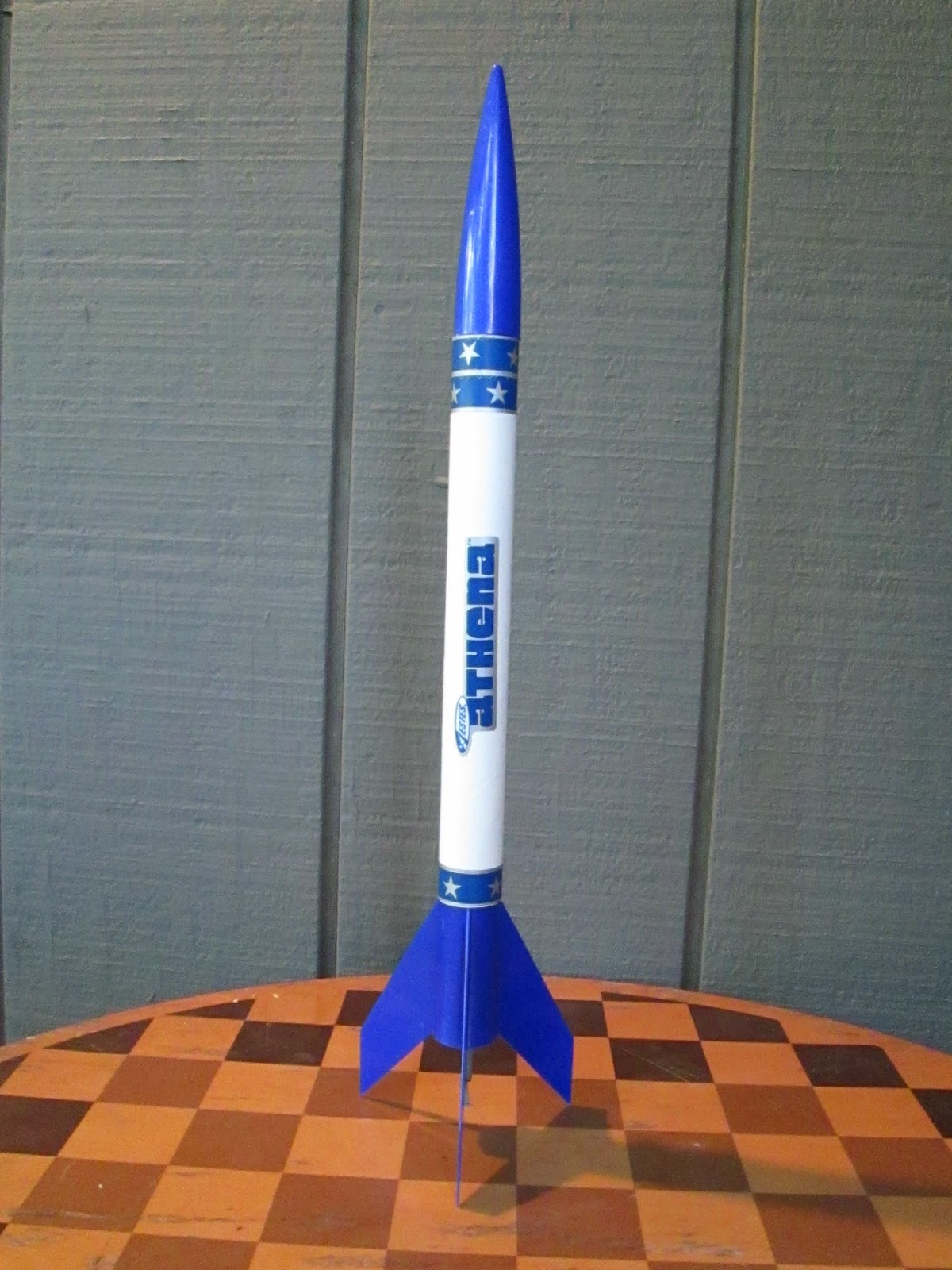 In many ways, a model rocket works the same way large rockets going into space work. That is, they obey the same laws of physics and take advantage of those laws to launch into the sky. They are built to make best use of the laws of aerodynamics, center of gravity, center of pressure, and Newton's laws of motion - particularly the third law of motion - every action has an equal and opposite reaction. The physics of rocketry is fascinating and part of why the hobby can be so educational.

But here, for people who stumble across this page knowing nothing about rocketry, I just want to address the basics of how a model rocket is put together, how it gets launched, and what happens afterwards.

These are not instructions. Rocket kits come with detailed instructions on how to correctly and safely assemble and launch rockets. In addition, there are books and websites other than this blog which give detailed instructions, and if you're preparing to launch model rockets, look at those. This is merely a quick and dirty description of what happens when you assemble and launch model rockets, and is meant partly for friends of mine who aren't into this hobby, and basically for people who stumble across this blog and wonder "what are you talking about, Daniel?" I plan to get more technical with my blog posts as I learn more and build more, so this page is for n00bs who come to this site and want to know what I'm on about.

A model rocket, like the Internet, is a series of tubes. Specifically, the body of the rocket (called the "body tube" or "airframe") is literally a paper or cardboard tube, and looks almost exactly like the tube in a roll of paper towels, with a spiral groove running up the side. Some larger rockets are made of fiberglass, but let's stick with the n00b stuff for now.

Inside the body tube, toward the base or aft of the rocket, is usually a narrower, shorter tube. This is called the motor mount or engine mount, and it's where you... uh... mount the engine. The engine mount is held in place in the center of the body tube by a couple of rings, also of cardboard, and the whole thing is glued together. Coming out of the bottom of the engine mount is often a little metal hook, called the motor retainer or engine retainer (people often use "motor" and "engine" interchangeably. I have read that an engine is technically a mechanical device, so a rocket should rightly be said to be powered by a motor. But I like the word "engine," so I'll probably just use both). When you slide a motor into the back of the rocket, this is the thing that keeps it from accidentally sliding back out.

Glued inside the motor mount tube, near the top, is a thin ring of paper or cardboard, called the engine block. This allows the motor to slide into the motor mount only so far, and prevents the engine from flying out the front of the rocket, blowing everything out of its way, and leaving the rocket sitting on the ground. It's an open ring, because near the end of its flight, the rocket motor will discharge a blast out the top, and the gasses from that explosion need to escape into the body tube (see "recovery charge," below). In a sense, this little ring carries the entire rocket, because if it's not there, the sudden force of the rocket engine can cause it to fly forward, leaving the rocket behind, like pulling a table cloth out from a table full of dishes.

On the outside of the body tube are the fins, usually three or four. Sometimes more, but almost never less. These act to keep the rocket stable in flight, so that it goes straight up, rather than all over the place. The fins are usually made of balsa wood or basswood, but can also be made of plastic (which they are in ready-to-fly models), thin plywood (for higher powered rockets) or some other composite material I don't yet know much about.

At the top of the rocket is a pointy bit called the nose cone, or simply, the nose. It's usually made of plastic or balsa wood.

Attached to the inside of the rocket is a long cord, either made of elastic - a thick rubber band - or Kevlar, or sometimes just string. The loose end of the cord is tied to the underside of the nose cone, and it's called the shock cord. When the rocket reaches its highest point, or apogee, the nose cone will pop off, and this shock cord is what keeps the rocket and nose cone from falling back to earth in completely separate locations. Also tied to the nose cone, and stuffed into the body of the rocket during flight, is some kind of "recovery device." Recovery basically means "getting your rocket back in one piece" and this is usually a parachute, or sometimes a long streamer, or even a series of helicopter blades or wings. Beginners usually use a parachute or streamer.

All of this stuff is essentially glued together with simple adhesives - often wood glue or white glue, and sometimes other special adhesives, depending on what materials the rocket is made of and how big or powerful it is. Then the rocket is painted, and sometimes decals or stickers are put on, and you've got your rocket.

The rocket motor is the one part you throw away. There are refillable engines, but for n00bs, the one-use engines are what you start with. They come in different sizes and ratings, depending on the size and weight of the rocket, and kind of look like huge firecrackers with no fuse. Inside the engine is a solid rocket propellant, often black powder. At the bottom of the engine is a small hole, and what you're looking at is actually a clay nozzle. This is where the flames and smoke and expanding gasses shoot out the back of the rocket, propelling it forward.

In most rocket engines, there are three sections of combustible material. The first, and longest, is the solid fuel. This burns quickly and propels the rocket into the sky. When the fuel burns out, the rocket will continue to coast upward for a bit (Newton's first law of motion). While this is happening, a second material, the delay charge, burns. It burns more slowly, and does not produce any thrust, but it does leave a trail of smoke - which is helpful, because it's easy to lose track of a rocket that shoots 1500 feet or more into the sky.

The delay charge burns for a specified number of seconds - say, 5 - until the rocket has slowed down (because of both gravity and aerodynamic drag) and nearly reached its apogee. Then, the third charge goes off - the "recovery charge." This is a little explosion out the top of the rocket motor into the body tube. The hot gasses from the recovery charge create a surge of pressure inside the rocket, which causes the nose to pop off and take the parachute with it. Then, the parachute opens (hopefully), the shock cord keeps the whole rocket together (hopefully), and the whole contraption drifts gently to earth. Then everybody freaks out and talks about how awesome that was.

About halfway up smaller model rockets is a tiny little tube, an inch or so long, which looks like a bit of drinking straw glued onto the body of the rocket. This is called the launch lug. Model rockets use what's called a launch rod to keep them pointed skyward for the first few fractions of a second after launch. The vertical rod is maybe 3 feet long, or more if it's a bigger rocket, and the reason for it is stability. The rocket's fins stabilize the rocket, but can only do so when it's flying, so that air is passing rapidly over the fins. When the rocket is sitting on the launch pad before launch, there's no wind passing over the fins. The launch rod is to keep the rocket pointed in the right direction until it gains enough speed for the fins to actually work - and this really only takes a fraction of a second, because these things are fast. The launch lug is there to keep the rocket attached to the launch rod while it is ascending. You basically slide the launch lug down over the rod, and when the rocket launches, it slides right back off.

To prepare a rocket for launch, you insert a rocket motor into the motor mount with the nozzle pointing downwards out the rear of the rocket. You take off the nose and parachute, and inside the body of the rocket, you insert some sheets of "recovery wadding." This is flame-resistant paper which is meant to protect the parachute. When the recovery charge goes off, flaming bits of recovery charge shoot forward into the rocket faster than the rocket can pressurize and free the parachute, and those bits of flaming charge can destroy the parachute unless there's something there to stop them.

Some people use different materials as recovery wadding, and larger rockets have a kind of baffle that lets the gasses get into the body tube, but trap the burning bits of charge. Nevertheless, ya gotta have something to keep your parachute from melting into a clump.

Then, you roll up the parachute and stuff it and the shock cord into the body, and securely attach the nose cone (the base of it, or "shoulder," fit snugly but not too tightly into the top of the body tube).

Then you flip the rocket over and insert a tiny, wire igniter into the nozzle of the rocket until it comes in contact with the propellant. When you launch, the igniter gets hot, causing the solid fuel to ignite. You keep the igniter in place with a plastic plug which will come out when the rocket launches.

Then you slide the rocket's launch lug down over the launch rod and hook the tips of the igniter up to a launch controller - a little battery-powered electrical device with a removable safety key and a launch button. The controller will send electricity through the igniter which will heat up like the wires in a toaster. It's attached to the igniter via wires 15 feet long or more.

Then you move back a safe distance from the launch pad, insert the safety key into your launch controller, do your countdown, press the launch button, and watch the rocket shoot into the sky at a speed you won't believe the first time you see it.

Then, you chase the rocket down, inspect the parachute to make sure it doesn't have any burns, bring it back to the launch pad, and do it all again.

So, that's basically how a model rocket works. There are larger ones that use different equipment, different fuels, and different building materials, but even larger high powered rockets operate much the same way.