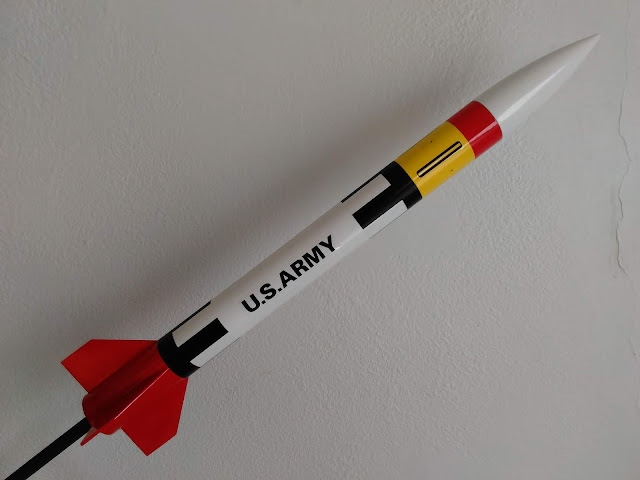 Many model rocket kits come with decals to add visual interest to a model - and if it's a scale kit, to add some realism.

Decals come in two varieties: waterslide and self-adhesive or self-stick.

Many builders, myself included, prefer waterslide decals. You soak them in water for a minute or two, and they slide right off their backing. You slide them in place on the rocket, and if you've made sure to dab a little water on the model first, you can then slide the decals around until they're in just the right spot. Then you dab lightly with a paper towel or cotton ball to remove any excess water and air bubbles, and when the decals set, they're pretty much permanent.

Waterslide decals are a little tricky to get used to at first, but once you do, they're much lighter and thinner, and they look like they're actually a part of the model's paint, rather than something just stuck there afterwards.

Most significant, they are re-positionable if you do them right, so you don't have to get them in exactly the right spot straight off the backing. With a little water, you have time to work with them before they're stuck.

Self-stick decals are really just stickers, and many rocketeers hate them. They're not only thicker and heavier than waterslides, if you don't do them right, they're stuck, wherever you happen to touch them to the model. So if you don't get them on straight the first time, you may never get them straight. It can be very frustrating.


My very first rocket - the Estes Silver Arrow, from the launch set I bought when I started out - had stickers. Man, I hated that rocket! I got the silver decal on crooked, then tried to straighten it out, only to have it rip itself and the body tube. It was so ugly! I was happy to give it away to the son of a friend of mine, who broke it a day later.

I had a bit better luck with my first Estes Crossfire ISX, a Skill Level 1 kit that also came with stickers. But I still wasn't happy. I had bubbles under the decals, raised edges, and if you look closely, you can see that things are crooked. 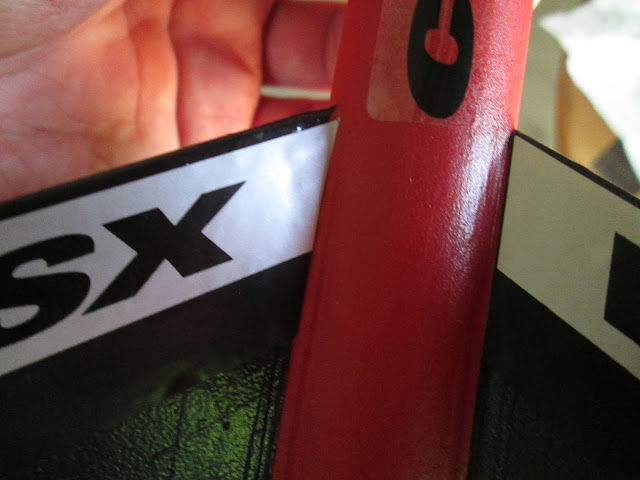 Not only that, I found the process of putting them on so stressful, as I was trying to be so careful not to mess up, that it took me a couple hours and I needed a break after each decal.

I hated self-adhesive decals so much that for a while, if a model came with them, I'd either not buy that model, or I would decide to do a completely different paint job.

But since then, I've learned the trick to doing it right. You can get those self-adhesive decals on your rockets where you want them to go the very first time, and if you mess up, you can take them off and re-position them. It's a lot less stressful than just trying to jab a sticker into the right place on your rocket.

There are three newer rockets in my current active fleet with self-stick decals, and despite my continued preference for waterslides, these three are among my nicest builds. They are: 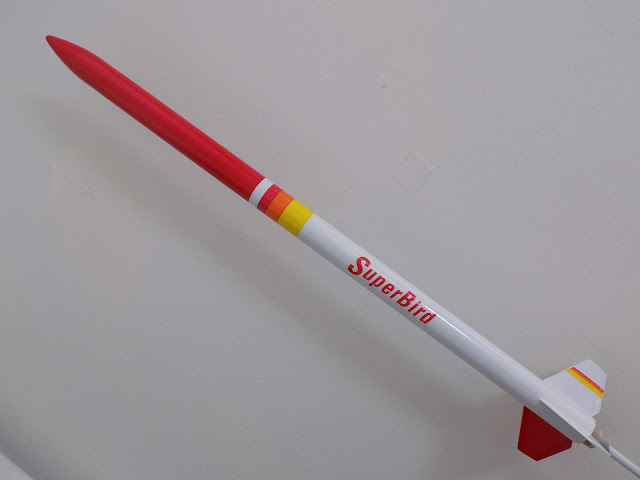 ...a newer Estes Crossfire ISX, which I modified, adding a drag-reducing tail cone... 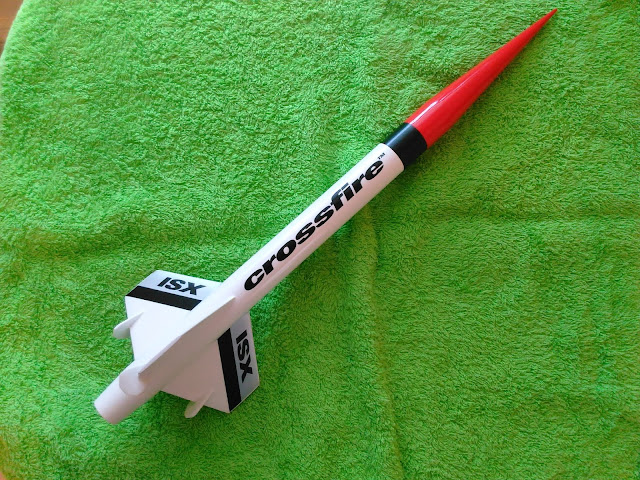 (I really should post the build I did of that rocket, because I like how it turned out.)

...and the Estes U.S. Army Patriot, seen at the top of the post.

All of these might be challenging, and two of these have decal wraps, meaning the sticker goes all the way around the model - and is supposed to meet itself on the other side! That's tricky enough to apply if you aren't also worried the decal will be stuck once you place it on there.

My method is similar to the method used when applying vinyl decals - such as those sold by Stickershock23.com. With one or two little tweaks, the same method can be applied to self-adhesive decals.

OK, here's the method. You will need:

First, you will notice that the decals are printed on a plastic sheet with a backing on them. No surprise there - just like any stickers you have ever seen. You need just the stickers, not the extra plastic it's printed on. The first step is to remove all the surrounding sticker plastic while leaving the decal itself stuck to the backing. You may need to hold the decal down as you peel the excess off. 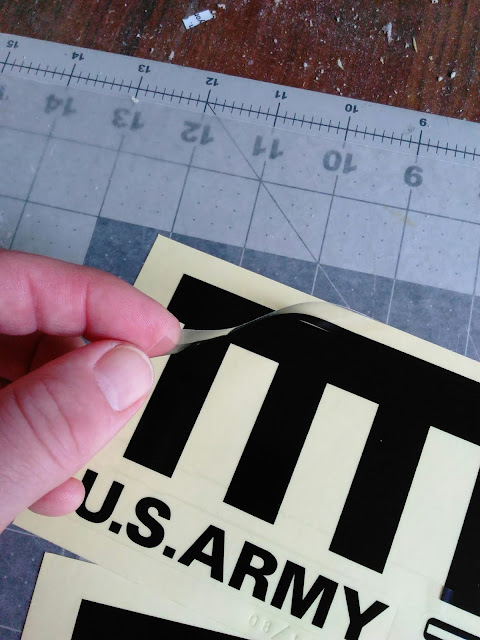 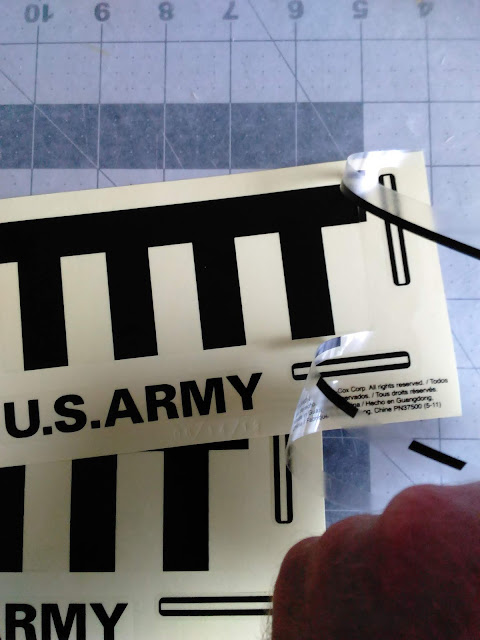 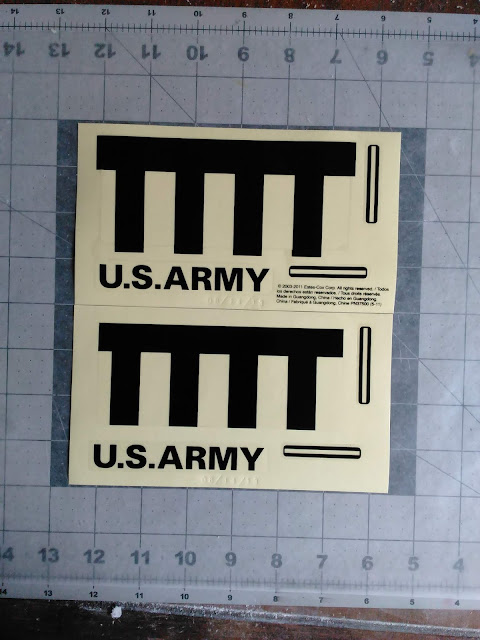 Above are the decals from the U.S. Army Patriot. I've removed the excess from the bottom one. You can see that all that's left is the decal itself - there's no extra black around it. This allows you to accurately scan the decal sheet, so that you can either make your own waterslide decals if you want, or clone the rocket and print your own decals at a later date, or share the decal scan with someone who needs it. It's also necessary for this method.

Next, cut the individual decals out with scissors - still leaving them on the backing. 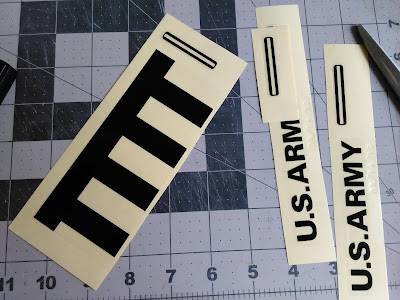 Take your first decal and trim the backing as closely as you can to the printed decal, taking care not to cut into the sticker itself. 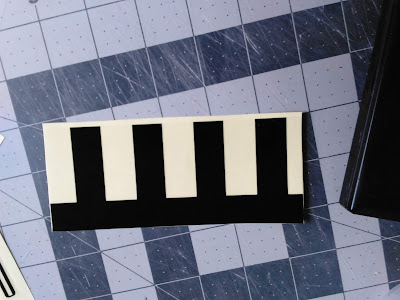 Now you will place the decal where you want it. You're not going to stick it on just yet, so again don't remove the backing.

If you're doing a wrap, make sure to wrap it nice and tight around the rocket, and make sure the two ends meet and that the wrap is nice and straight. 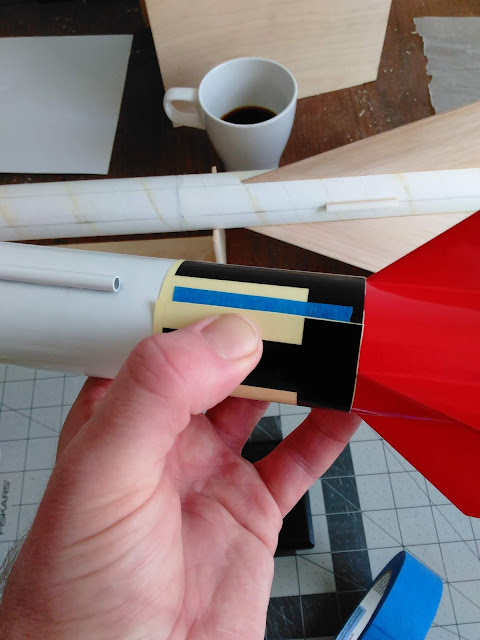 Then you will take a piece of the tape and carefully tape one edge of your self-stick decal in place. Again, the backing is still on the sticker at this point. That tape will act as a hinge, so that you can let go of the rocket and sticker, and it will stay in the same place.

(You can see the tape in place in the photo above - that's just because it's tough to take pictures while doing this, so I had to take that shot out of sequence, after I'd already secured the decal in place.) 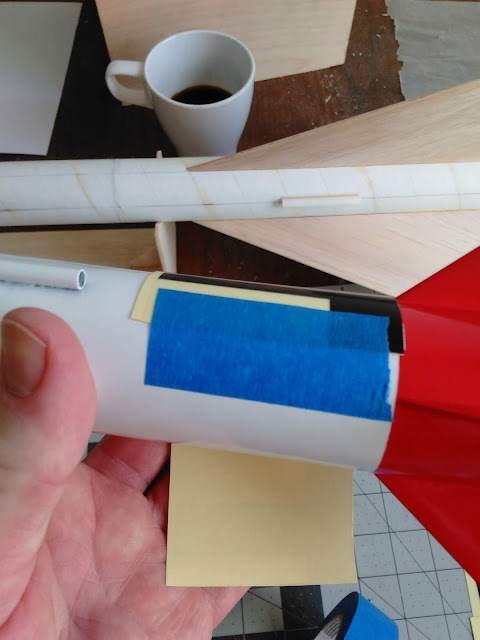 Now that you've got your tape hinge in place, you can set the rocket down if you need to. The decal will go right back where you want it in a minute. 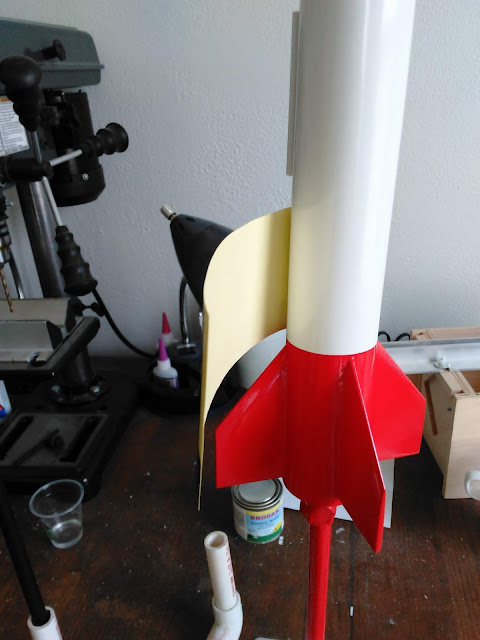 Get your spray bottle with the soap and water mixture ready and close at hand. 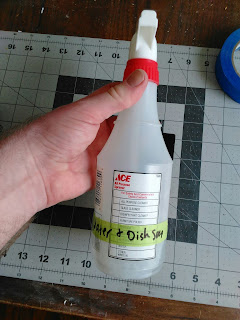 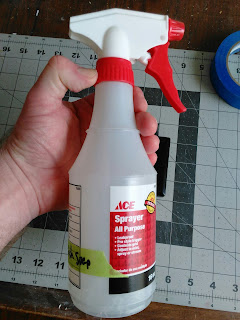 Now peel the backing off your decal, holding it away from the rocket. Spritz the decal and rocket with a light mist of the water and soap mixture. 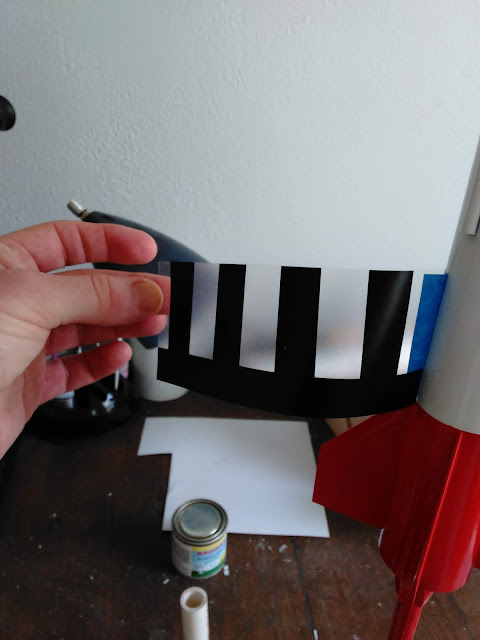 Keeping the decal taught, carefully lay it down on the rocket, working from the tape end. You can squeeze out extra water and air bubbles with your fingers as you go.

If you are doing a wrap, make sure to remove the tape hinge before you get to the end of the decal. Peel the tape off in the opposite direction from which you're laying the decal - so that the tape doesn't pull the sticker off!


The decal should be perfectly in place, but if you've made a mistake, and the decal is crooked or the ends of your wrap don't match up, you can easily pull the decal back up, thanks to the soap and water! 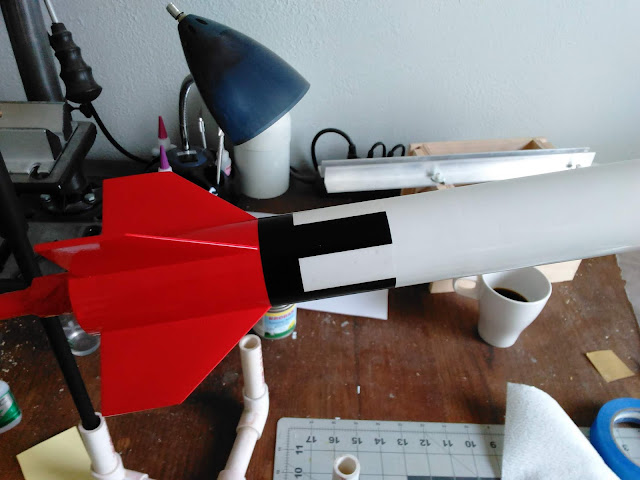 Take your time getting the placement right before you put your tape hinge down, and you shouldn't have much of a problem. 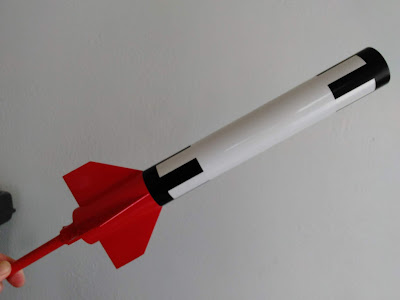 This method will help you get your stickers on straight, where you want them, and eliminate bubbles. 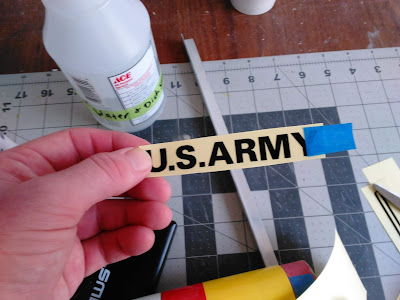 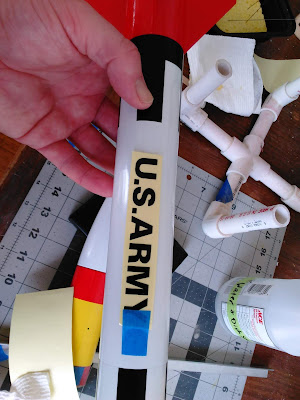 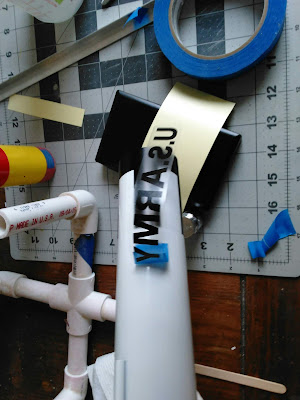 It takes some care, but this method is much faster and easier to get the results you want than merely trying to get a sticker perfectly in place the first time. There's no way I would have made this rocket look this nice if I didn't use the method described here.

This can be used for pretty much any self-stick decal. You just have to figure out where the best place is for the hinge to go. It might be on an end, or it might be on a longer side. 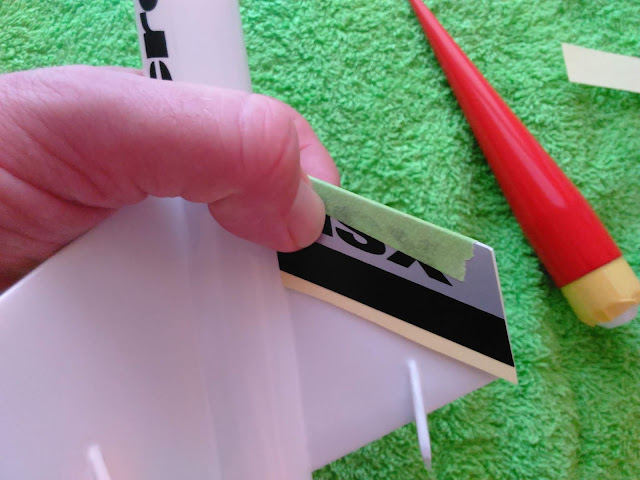 Take your time, and you'll get those self-adhesive decals where you want them. Your rockets can look the way you envision them!

Have a question you'd like to see addressed on this blog? Email me at iamtherocketn00b@gmail.com.
Posted by The Rocket N00b at 9:35 AM