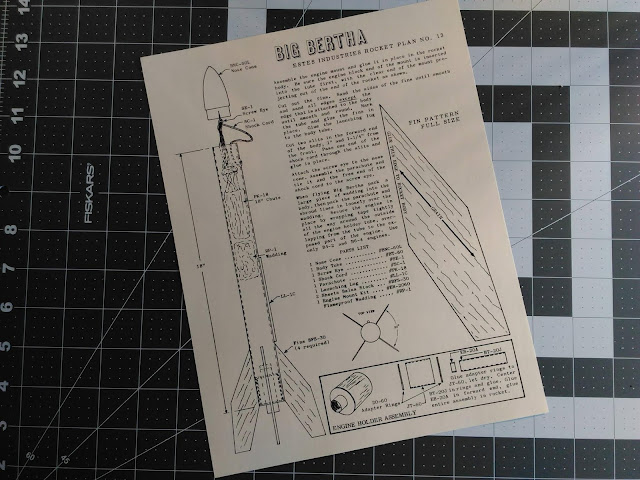 Scanned, downloadable PDF files of The Model Rocket News can be found in a few places around the Internet. There are probably a few missing, and I don't know that any one site has the whole collection, but a lot of these have fortunately been preserved.

A note to the long-timers and the historical detail-oriented: I'm not going to do much fact-checking on this post. I'd like to get to the build. Feel free to add any historical facts, details, or corrections in the comments (but be nice!).

These can be downloaded for free, and you can read them online or print them out. It's interesting to go through and see where or when some of the ideas we now find common practice in model rocketry originated.

If you print these PDFs out, they should print in the original size. This is particularly helpful if you want to try and build one of the many rocket designs published by Estes in the 1960's and 1970's. Some plans use parts and tube sizes which are no longer produced by Estes (though you may find something similar through Semroc at eRockets.biz - you can always email Randy Boadway and ask. Sometimes he has made custom parts for people), but a lot of plans use still-common parts or tubes.

Instructions are pretty simple, and if you've put together a few kits, you should be able to follow the plans. 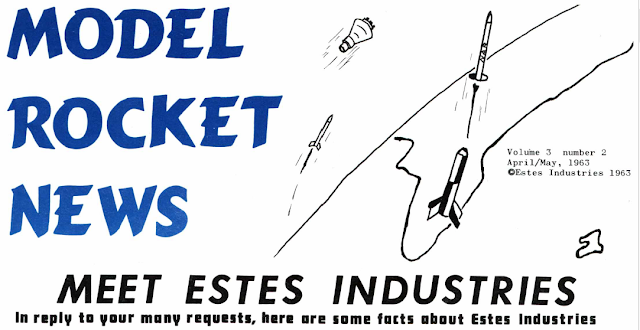 The Big Bertha was originally published in a 1963 edition of the MRN - Volume 3, Number 2 (click here for the PDF). A printout of the page would make a nice, framed wall hanging, I think. But if you're building a rocket, you need the printout for the fin templates, which you will cut out and trace onto some balsa sheet.

While I planned to make the rocket look as close as I could to the original Bertha plans, I'd make a few minor changes.

I would follow the fin templates exactly. These were of a slightly different shape than the current kits. Things change over time, due to plans being re-drawn, or tools used to cut parts wearing out over time and changing shape (this is particularly true of balsa nose cones), or what have you.


Early instructions called for motor mounts being assembled with the centering rings attached to either end of a coupler. I guess they wanted more strength back then, or felt this would give better alignment. From what I've read, they'd sometimes get stuck halfway in when the glue would seize up. But I almost considered giving this a try. In the end, I decided against it. I would do a standard, modern motor mount - two centering rings and a motor tube, without the coupler.

You'll also notice there is no motor hook mentioned in the original plan. Presumably, you would keep a motor installed in the rocket with a wrap of tape, either friction fitting the motor into the tube, or wrapping tape around the base of the motor and motor tube.

That's fine to do, but I prefer the convenience of a hook, so I decided to include one.

These plans also predate the trifold paper shock cord mount common in today's Estes kits {sometimes referred to as a "teabag mount" because of its resemblance to a tea bag). Instead, two slits were made in the rocket body, and a shock cord was passed through from the back to the front and secured in place.

I really have no idea how they did this. That looks like some tricky weaving to me, threading that shock cord from back to front from the inside of the body tube. I would find that terribly frustrating. In any case, I didn't want to mar the rocket by cutting slits into it, so I'd use an internal shock cord mount on my Bertha.

One thing I was unsure of was the nose cone. I wasn't exactly going for 100% historical accuracy with this rocket, but if I had been, I'd have had some questions about the nose cone.

The current Big Bertha kit comes with a plastic, elliptical nose cone which is about 2.5 inches long (not counting the shoulder), and notably, it isn't pointy.

In the old days, of course, all nose cones were made of balsa, not plastic. The part, as listed, is called BNC-60L. BNC for "balsa nose cone," 60 for the fact that it fit a BT-60 body tube, and I suppose L... because it was long.

A couple of rocketry suppliers sell a BNC-60L today - eRockets.biz with their Semroc line, and Balsa Machining Service.

The plan drawing shows a nose cone which is nearly elliptical, except that it's got a slight point on the end. Is it an ogive? Is it a pointy ellipsis (if that's a thing)? I don't know, except that it's a different shape than on the Berthas I'm used to seeing. Does the drawing in the plan accurately represent the shape of the part Estes was selling at the time, or did it differ? 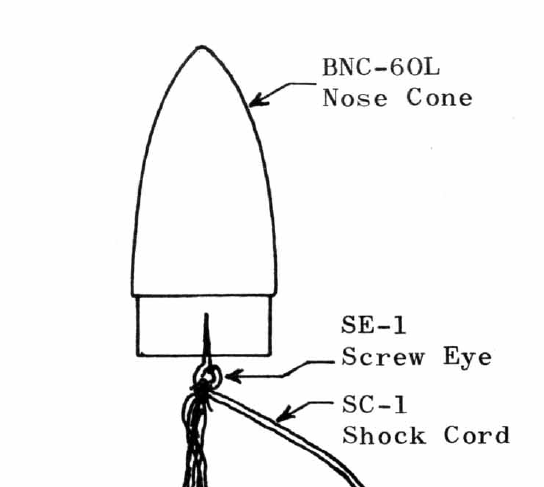 One thing that's sure is that nose cones changed shape over time, as parts used to machine them either changed through wear, or were replaced, or the parts themselves were redesigned either for aesthetic reasons or maybe even to save a little bit of balsa.

A few vendors sell Bertha-style balsa cones. eRockets.biz sells a BNC60-L, the part listed in the plan, and it's 3.1 inches long. The image shows it as a non-pointy elliptical cone. They also sell a BNC60-MS. It's about 2.6 inches long. Balsa Machining Service and Aerospace Specialty Products also sell the BNC60-MS, though they're slightly different lengths. Balsa Machining describes it as the Bertha cone. This may represent another era of Bertha cones. 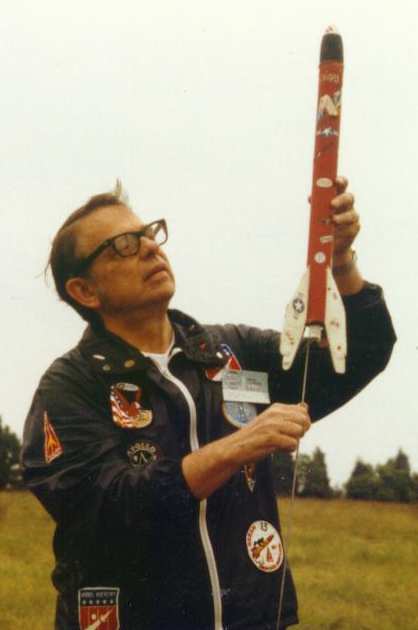 Now Vern Estes' original Big Bertha definitely looks like it has a longer nose cone than the current one. In pictures I've seen online, it really doesn't appear to have a pointed tip, though things sometimes look deceptive in photographs.


So, I'm going to guess, at this point, that the prototypical Big Bertha, the one you'd have built from the plan in the Model Rocket News, using parts purchased from Estes available in 1963, would have been about 3.1 inches long, maybe pointy/maybe not. And if I'd have intended to build a historically accurate 1963 Big Bertha, and had done all of this research beforehand, a 3.1 inch nose cone is what I'd have settled on.

But it was a lot of information to digest, and not being sure about any of it, I went with a guess. I decided on a 2.6 inch nose cone, which I would attempt to make myself. If that failed, I'd go online and buy one.

I figured I'd have a well-made, scratch built model rocket which most people would look at and simply say "That's a Big Bertha" without nitpicking nose cone length or historical this or that.

Which is what I did. In the next post: making the nose cone - from scratch!

Have a question you'd like to see addressed on this blog? Email me at iamtherocketn00b@gmail.com.
Posted by The Rocket N00b at 12:45 PM