Built from Scratch - A Tale of Two Berthas - Part 1 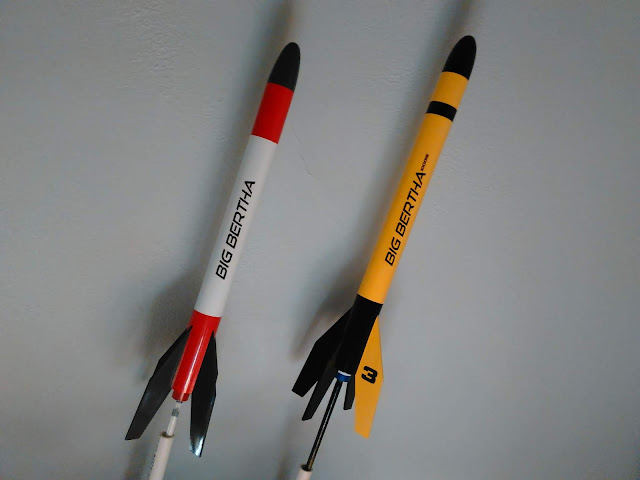 I recently finished building two Big Bertha rockets - from scratch, rather than from kits. As a guide, I used the original plans, published by Estes in Model Rocket News in 1963, when Bertha was a free plan, before it was sold as a kit (the Big Bertha is now the longest continually produced model rocket kit in history).

I meant to build just one scratch Bertha, but ended up building two of them, almost by accident. I do this a lot.

I started this project for a few reasons. My original Big Bertha kit was one of my earliest builds, detailed a few years ago on this blog. I mention the Bertha a lot here, not because it's always been my favorite model rocket (it hasn't), but because it's so iconic, and simple, and with its large parts, it makes a good demo rocket. 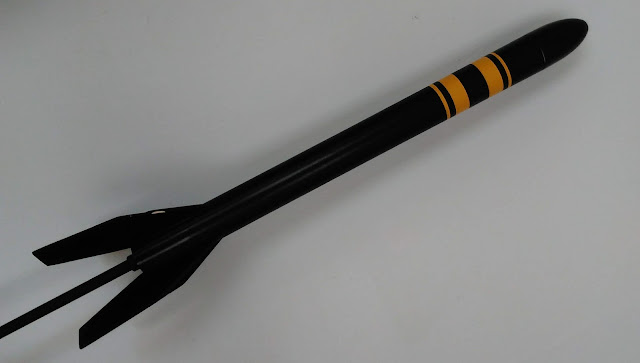 But last season, I flew my now beat up Bertha for my final flight of the fall on a C6-3 motor. Our Launch Control Officer, Kenn, commented "There's no better combination of rocket and motor, folks!" and I thought, you know what, he's right. That is a great rocket!

The Bertha is such a pleasure to see fly. I always brought it to a launch as a kind of afterthought, thinking I should take something that doesn't fly too high, just in case. But each time I flew it, it was just... fun! It goes up relatively high, but you can still keep your eye on it, and it floats gently back down on its 18 inch parachute, and... Well, I guess I just have a soft spot for the Bertha. So, I wanted another one. 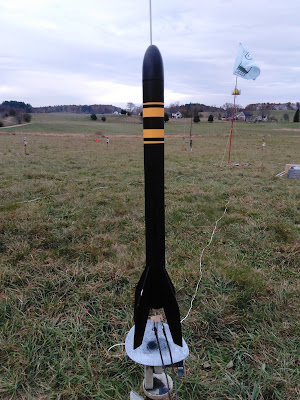 That was reason 1. Reason 2 is that, while it does fly really well on C motors, I've always wanted to put a D12 in it, but I built the Bertha kit before I knew you could upgrade these things. The Berthas I've seen fly on D12-5 black powder motors are really fun. With its large fins, the Bertha is plenty stable, and can handle extra weight at the back. So, I decided to build a Bertha with a 24mm diameter motor mount, for those Estes D12 motors.

Reason number 3 is that I always wanted to build one of the plans from the old Estes Model Rocket News. Back in the 1960s, many of these early newsletters featured rockets either designed by Vern Estes himself, or by readers of the Model Rocket News, who'd send in their own designs, which used Estes stock parts. In those days, it was pretty common for model rocketeers to have a fleet which was at least in part built from scratch, rather than from kits.

I figured the Bertha would be a good place to start. No odd, out-of-production tube sizes or nose cones to buy. Just a BT-60 tube, some 1/8 inch fin stock, and a stubby elliptical nose cone. Speaking of which...

Reason 4: I had always wanted to try turning my own nose cone from a block of balsa. 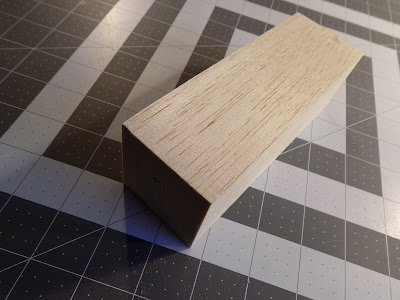 The plan was to see how hard this could be, using a hand drill as a kind of lathe. From what I'd read in both the Model Rocket News and the Handbook of Model Rocketry, this was supposedly not only doable, but not all that difficult. I wasn't sure that was true, but I wanted to try my hand at it. 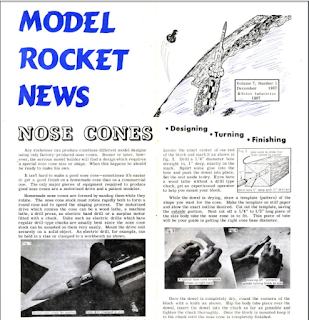 It's been a while since I've done this kind of Rocket N00b stuff where I try to figure out how something is supposed to be done and then publish it here. I thought this would be a good place to start, and it would save me having to buy a cone. I wanted to keep this Bertha cheap, if I could.

So, despite my promise to myself to finish building everything I'd been working on for a year and a half before starting any new rocket builds, I began working on the Bertha. Then I ended up making a second one. More on that when we get to it.

The next few posts will detail my scratch build of the two Berthas.

Have a question you'd like to see addressed on this blog? Email me at iamtherocketn00b@gmail.com.
Posted by The Rocket N00b at 3:22 PM