Chad is the Artistic Director of the Bloomington Playwrights Project, where I do a lot of acting and some directing. He's a fellow space nerd, and the friend I launch rockets with. I mention him so often on this blog, I thought I'd have a page to link to, rather than explaining who he is each time I mention him.

Chad builds quick and fast, while I take my time. I really like trying to get the details of the finish looking nice. As I mention multiple times on this blog, when Chad and I buy the same rocket, I try to give mine a different paint job, to differentiate between the two. It also helps when he and I do a dual launch of the same rocket; we can more easily tell whose is whose while its flying up into the sky.

Chad loses rockets. A lot. I mean, a lot! He tends to lose at least one per launch - due to trees, wind, crashes, his rockets blowing up, fins breaking off as he's getting them out of the car... You name it. Last time I counted, he'd lost about 18-19 rockets. In two months' time. That's like... maybe 500 bucks of rockets!

Apparently, Chad's motto is #Yolo - You Only Launch Once.

Chad is now also the artistic director of the Adirondack Theatre Festival in Glen Falls, N.Y., so he splits his time between there and Bloomington. This means I have a lot fewer rocket disasters to witness these days...

Chad has a rabbit which he pretends is an astronaut... 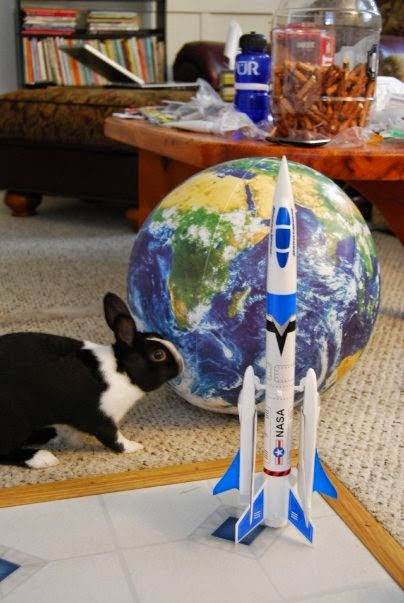