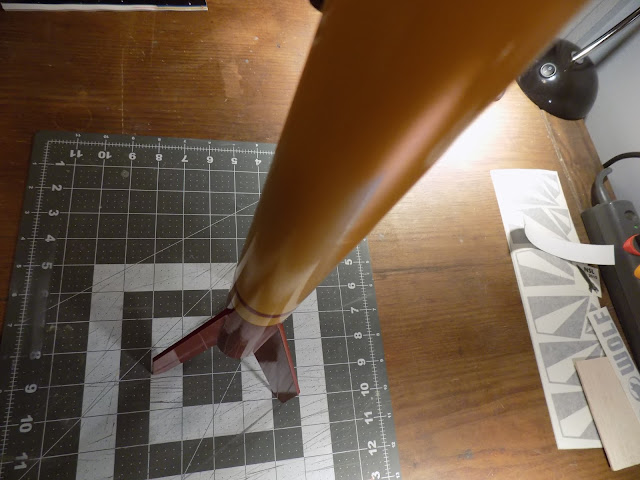 So far, we've established that painting a model rocket can add significant weight. We've also established that added weight can have a negative impact on the altitude we can expect from a given model. Comparing simulated flights between our heavier, painted Estes Monarch with the lighter, unpainted Monarch showed this difference.

Then, in Part 2, we took a detour to discuss aerodynamic drag - the resistance our rockets encounter from the surrounding air. By comparing flight simulations of our smaller, 3-finned Estes Monarch with the larger, 4-finned Big Bertha, we saw that, even though a lighter rocket will usually fly higher than a heavier one, drag is significant enough a force to change that; the larger, draggier Big Bertha simply cannot catch up to our finished, painted Monarch, even if we change the weight of the Bertha so that it matches that of the 25% lighter, unpainted Monarch we've been looking at. 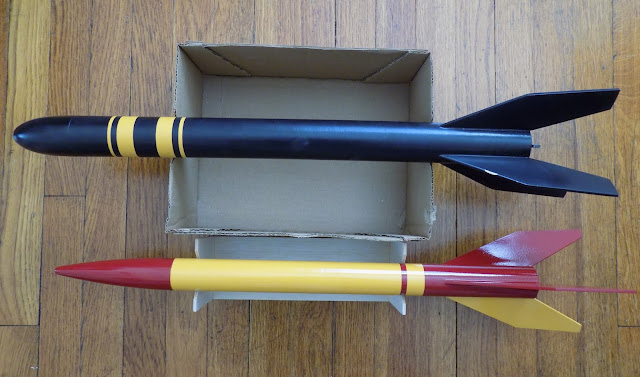 What about two rockets of the same design - exactly the same size and shape - but one is heavier and one is lighter? One is painted, and the other isn't?

All things being equal, a lighter model rocket will usually fly higher than a heavier one. We saw that in our flight simulations from Part 1 of this series. The exception to this is if the rocket is far too light - below the optimal mass for its size and shape. A featherweight rocket may not have enough inertia to overcome the drag holding it back. Remember our comparison of throwing a bowling ball, a baseball, and a foam rubber ball up into the air.

But since most model rockets are probably heavier than they need to be even before building, you probably won't encounter that problem*.

But when you paint a rocket, all things are no longer equal.

When you use OpenRocket to design a rocket or build a simulation of an existing design, you start with the nose cone, and add parts one by one. All parts will have default settings - such as weight and center of gravity - depending on what they're made of and how thick they are.

The default setting of each part for surface texture is "Regular paint," and is followed by the number 60 and the symbol μm. 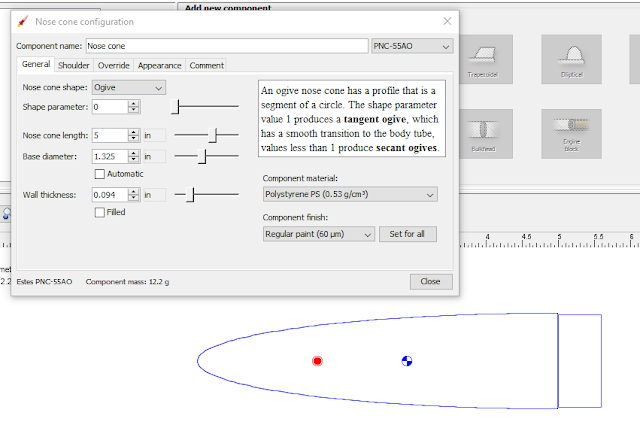 This represents the average roughness height of the surface, and is measured in micrometres, or microns. A micron is 0.001 millimeter - very tiny. Here's a photo of a carbon fiber filament - only six microns in diameter, compared to a human hair, about 50 μm in diameter. 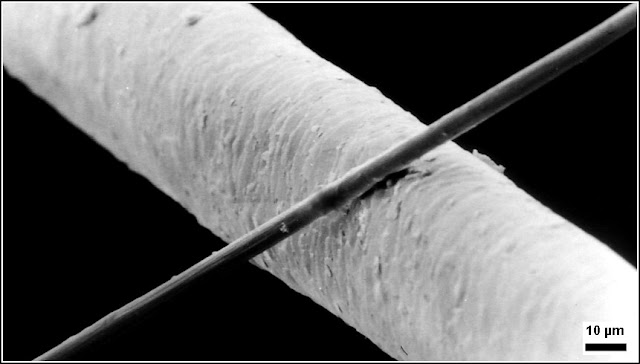 So, in OpenRocket, if you change nothing about the surface texture, the assumption is that the rocket is painted, and that the tiny bumps in the paint job are, on average, 60 μm high.

Rough surface texture creates more turbulent airflow over the rocket, which in turn increases drag. Another thing increases drag dramatically - the velocity of flight. It might make sense that drag goes up as speed goes up. If you stick your hand out a car window while traveling at 20 miles per hour, the force on your hand is very light, while at 60 miles per hour, the wind pushes hard on your hand.

But here's the thing: while drag from  laminar flow increases proportionally with airspeed, drag from turbulent flow increases as a square of the increase in velocity. That means if you double the speed of the rocket, drag goes up four times. If you triple the rocket's speed, drag increases nine times. You can see the need to decrease the amount of turbulence the rocket experiences. That's what a smooth paint job can do - decrease turbulent airflow.

We've seen how a heavy paint job adds weight, and how added weight reduces altitude. But to see how the surface texture of paint affects drag, we need to factor that into our simulation.

Returning to the unpainted Monarch simulation, I click on the nose cone and select "Unfinished," then click the box that says "Set for all." 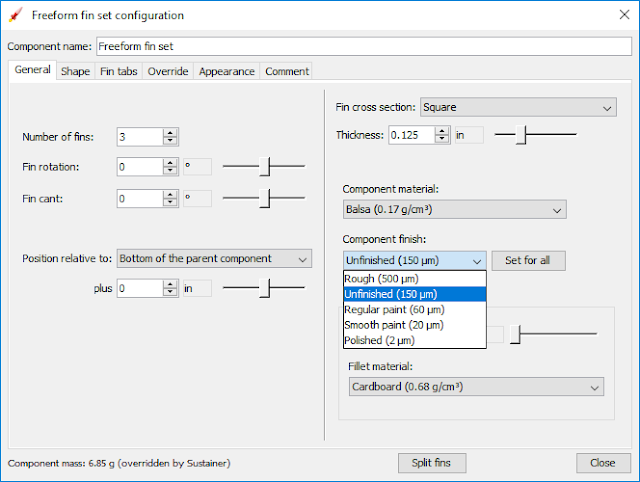 Now all components of the simulated rocket - the nose cone, body, fins, and even launch lug - have a simulated surface texture with an average height of 150 μm.

Here, we should note something. A lot of things in OpenRocket are approximations, and this is a good example. Obviously, all unfinished materials don't have the same texture. An unfinished plastic nose cone is smoother than a balsa cone, with its exposed wood grain, and a set of raw balsa fins are rougher than an unpainted paper body tube with a slick coating. But I think this is good enough to illustrate the principle we're talking about here.

Also, the altitudes are approximate. You might find you get a different result each time you run a simulation. We'll go into why another time.

How do I know how good my paint job is? I don't have a means of measuring the surface roughness in microns. But I know that my paint job isn't polished, and the paint didn't go on as smoothly this time as I've managed in the past. There's a bit of visible texture.

Here are a few closeups. 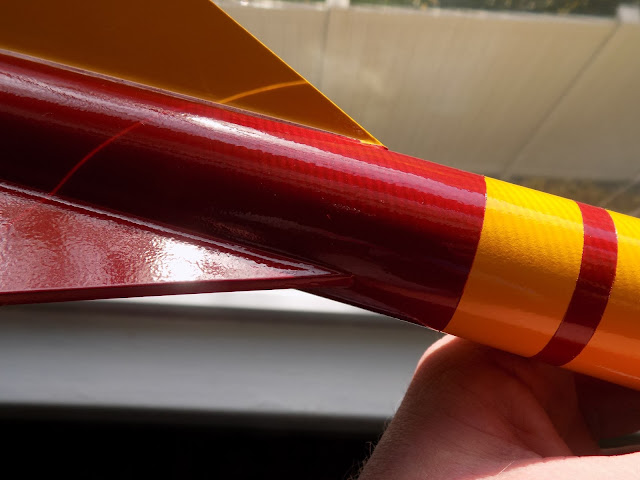 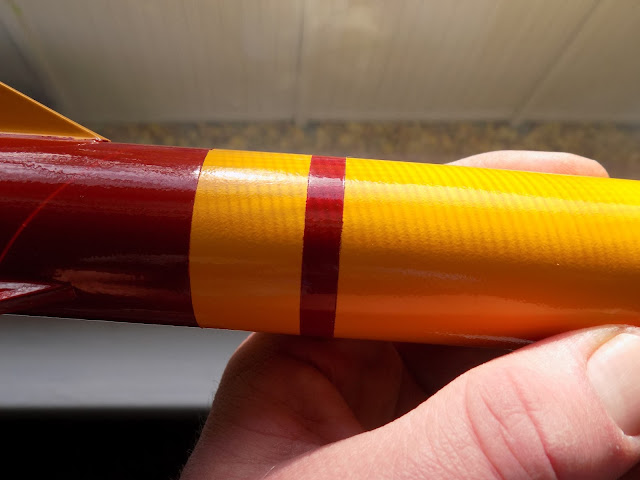 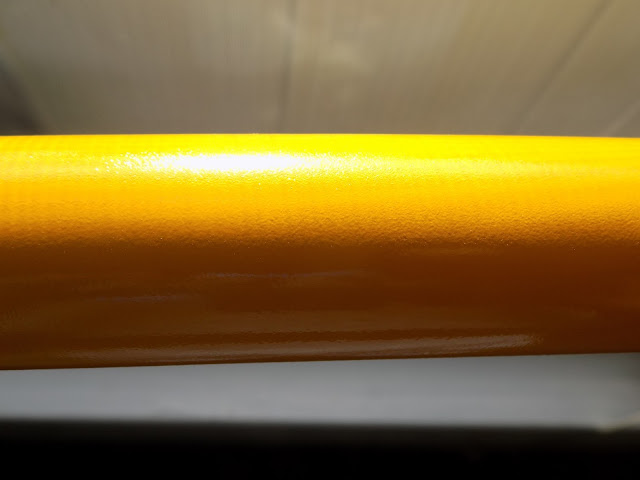 There are little bumps. But, they're smooth bumps, and I've seen and done far worse. So, I'm calling this "Regular paint." It's a guess, but, I think, a fair one.


The fact that the margin narrows with the D12-5 can be attributed to the fact we discussed before, that drag increases exponentially with velocity. On the D12, the both rockets fly nearly 100 miles per hour faster than on the C6. The lighter rocket still wins, but the drag force is significant enough to narrow the gap.

Here are the results of the new flight simulation:

With a rougher, unfinished surface texture, the unpainted Monarch has lost some altitude. It still beats the heavier Monarch on a C6-5 motor - this time by 53 feet. But on the D12-5 motor, the smoother, painted rocket now wins by 27 feet!

Why is this? Again, look at the maximum velocity of the models. On a D12 motor, the rocket flies 94 miles per hour faster than on a C6-5 motor. The increased drag at higher speeds works to stop the rocket short of the heavier Monarch's peak altitude.

What if we got a better paint job on the Monarch?  What if our paint job was good enough we felt comfortable calling it "Smooth paint," with an average surface roughness of only 20 microns? 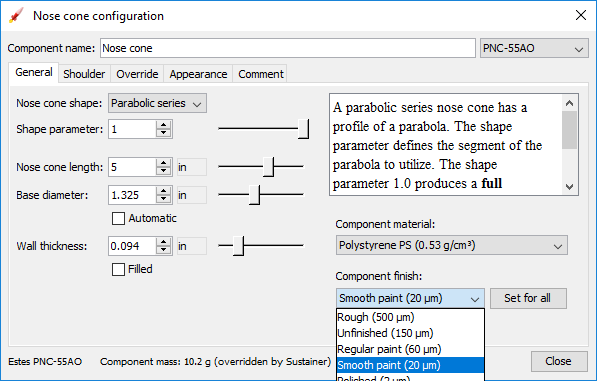 Now how high does the rocket fly?

By decreasing turbulent airflow even further with a smooth paint job, we increase our altitude even further, nearly catching up with a C6 motor, and breaking 1,100 feet with the D.

What if we carefully polish the finish on the paint job, and get it nearly perfect, with a mirror-smooth finish of only 2 microns in average height? 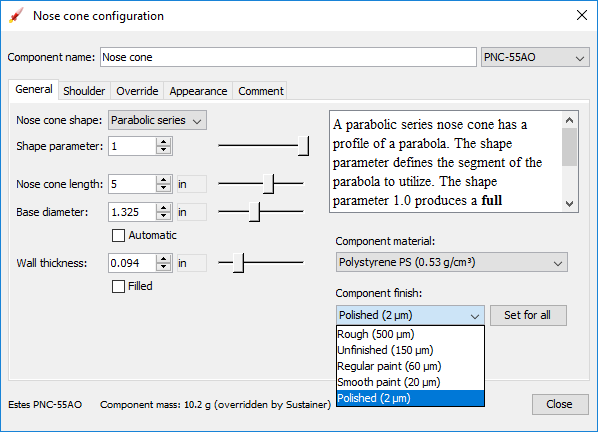 Now we've increased our altitude on this rocket even more.

But we still haven't caught up to the lighter rocket flying on a C6-5 motor. That paint job is just a little too heavy.

Let's look at the flip side to all this. What if we could paint the rocket nice and smooth, and the paint weighed absolutely nothing? Let's take our "unpainted" Monarch, give it an imaginary paint job with no added mass, and polish it smooth. What kind of altitude could we expect from a lighter but smoother rocket?

Now we've gained some serious altitude. By keeping the rocket light and making it as smooth as we can, we're giving the rocket the advantage in overcoming both gravity and aerodynamic drag. We've taken this little sport rocket and pushed it to perform its best.

Of course, paint doesn't weigh nothing. We're always going to add some mass. But we can try to minimize that. The Monarch isn't a high-performance model, with its goofy, oversized, 1/8-inch-thick fins, but that doesn't mean we can't make the most of it.

What if we painted the rocket with real paint - and, as happened in the case of my rocket, the paint went on a bit heavy - but instead of a nice, smooth paint job, we got something less than desirable? Sometimes, a paint can will have chunks of pigment settled in it, and you'll end up with a paint job that's really spiky and rough.

When my friend Chad moved across the country, he gave me his rockets. I picked one up, and it actually hurt - the texture was like little needles. The surface was as if it were covered in tiny claws  for grasping at the air as the rocket flew.

What if that were the case with our painted Monarch? Let's select a "Rough" finish, with an average height of 500 microns. 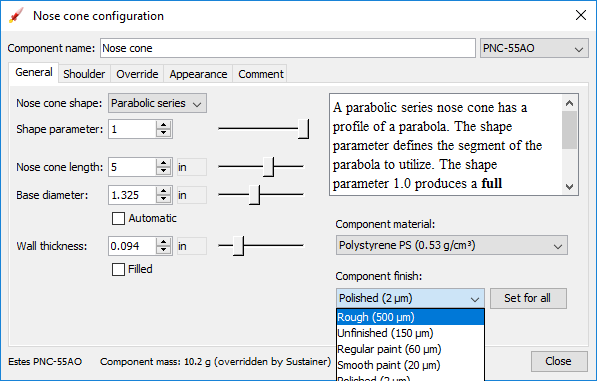 Here we see how paint can be a hindrance, if done badly. Not only will the rocket not look nice, it won't fly as high.

So, if you want to get the most performance from a model rocket, the key is to build light, and make the surface smooth.

I build most of my rockets to look nice. I take a few steps in the hopes that they'll perform a little better, but I don't always try to maximize their altitude. That's certainly true of the Monarch.

This all started with a simple question in my mind: How much weight am I adding by painting the rocket? But now that I see the results of our simulations, something's bugging me.

The painted Monarch can't match the unpainted one on a C motor - only on a D - even by reducing the drag and making the paint as smooth as possible. But the Monarch was never meant to fly on D motors. The only reason mine can is that I set the kit motor mount aside and upgraded to a larger mount. What if I want to paint the rocket, but I also want it to fly as high as it can?

The key is to paint lighter and maybe smoother. How much lighter? And can it be done? And how can it be done? I've promised to answer these questions the last two posts. Next time, we'll actually look into it.

*There are some exceptions to this. Model rocket have been made from things like Styrofoam, pool noodles, and even Mylar balloons. These rockets are so light they don't coast very much after motor burnout. Such model rockets are some of the few which would probably benefit from a little added weight. But, then, such rockets are meant to fly to relatively low altitudes, even on higher thrust motors.

Have a question you'd like to see addressed on this blog? Email me at iamtherocketn00b@gmail.com.
Posted by The Rocket N00b at 4:29 PM