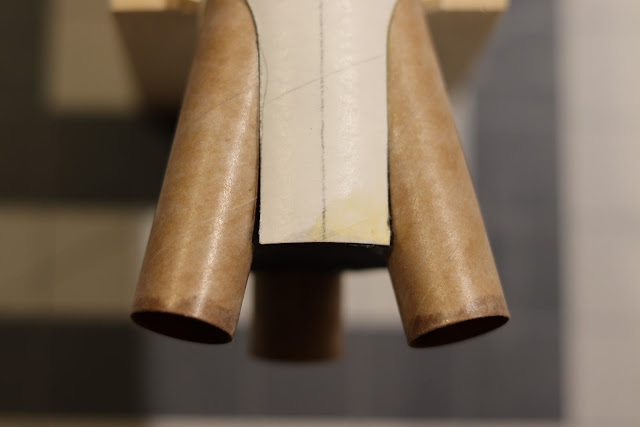 Click here to go to the beginning of the build.

Once I had the motor mount installed in the FlisKits Tres, it looked pretty good and felt nice and solid. But there were small gaps between the motor tubes and the main BT-60 body tube. I suspect this may be the case for most, if not all, builders of this kit.

Those will need to be filled in. Now, it's not just that I don't like the way this looks. Remember that there is only one "centering ring" in this rocket, and it's at the very base, flush with the end of the body tube. So there's not a second ring at the top of the mount to make a nice, airtight seal.

When the ejection charges on the rocket motors go off, they need to pressurize the inside of the body tube in order to blow the nose cone off - and eject the parachute. If you have large gaps like the ones in the photo above, all the ejection charge gasses may just leak out the back. This would lead to a failure to deploy the parachute. The rocket would then come in ballistic, meaning it would nose dive fast and hard into the ground. This would most likely destroy the rocket - and is potentially dangerous, should it hit something or someone.

So, we'll need to fix that. To do this, we'll use glue and make a nice fillet around each of the engine tubes where they meet the body tube.

Even if your rocket has no gaps here, it's not a bad idea to put fillets around the motor tubes. It will hide any jagged edges you've got left, and will make the whole rocket look neater.

To make the fillets, I used the same thing I use for most of my fin fillets - Titebond No-Run, No-Drip molding and trim wood glue. Ever since hearing about this stuff from Chris Michielssen's Model Rocket Building blog, I've used it to make fillets. Swapping out the wide Titebond nozzle for an Elmer's fine point nozzle is a tip I picked up from Chris. 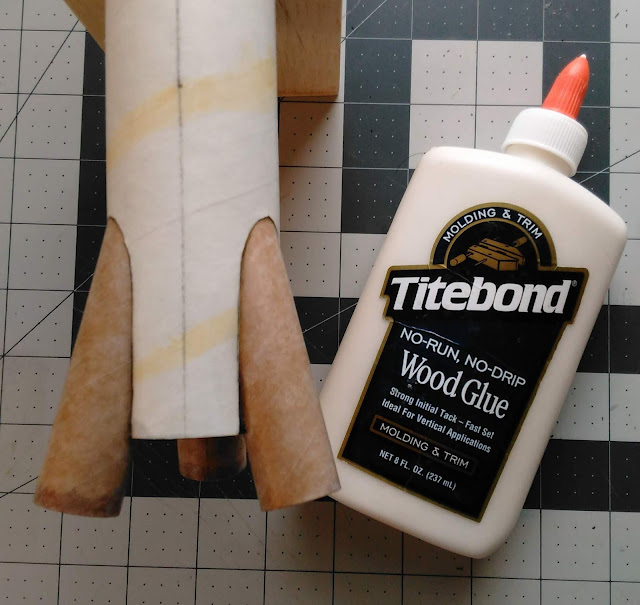 Because it's less prone to sagging and shrinking, and because it starts to dry quickly, this stuff is ideal for filleting these gaps.

I started by running a bead of glue from near the top of the motor tube to the end of the body tube. 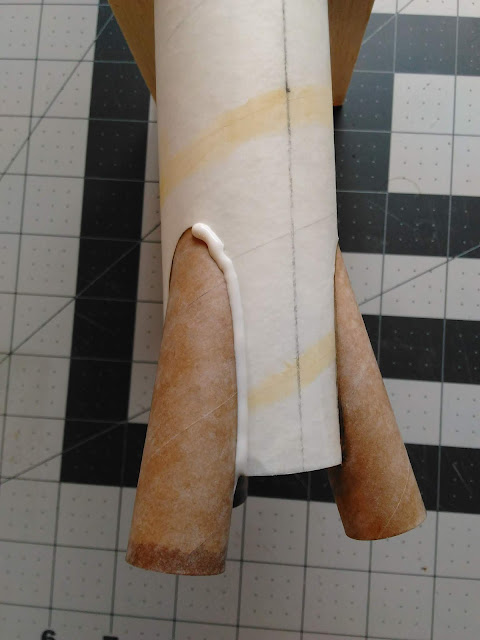 You don't need such a thick bead, by the way. Most of this is coming off. When my bottle gets lower, sometimes I squeeze out a bead of glue, and there are gaps in it. So I went a little heavy here to make sure I had one, unbroken line of glue.

If you try to smooth the whole fillet in one swipe, you'll end up with a mess. By the time you get to the end, you'll have so much excess glue built up on your finger that it will end up overflowing the sides of your finger. It's better to do a few swipes and clean off your fingertip with a damp sponge or cloth.

So I started about a third of the way up from the back end, and swept the excess off toward the end of the tube. 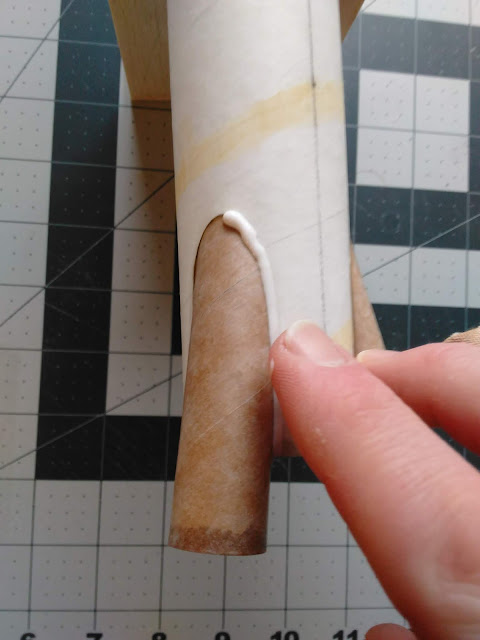 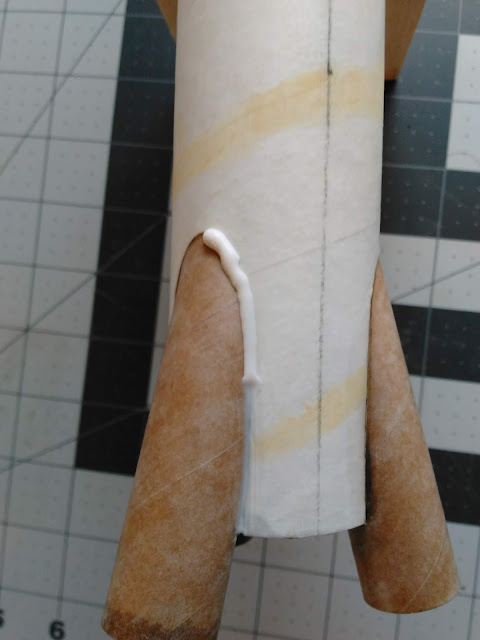 I went another third of the way up, and again swiped to the bottom. 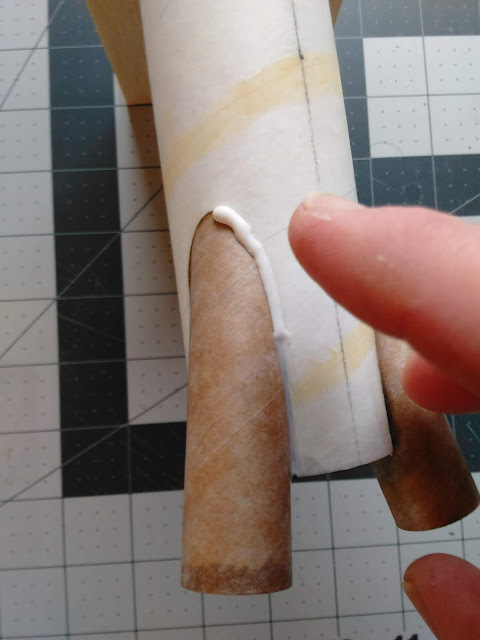 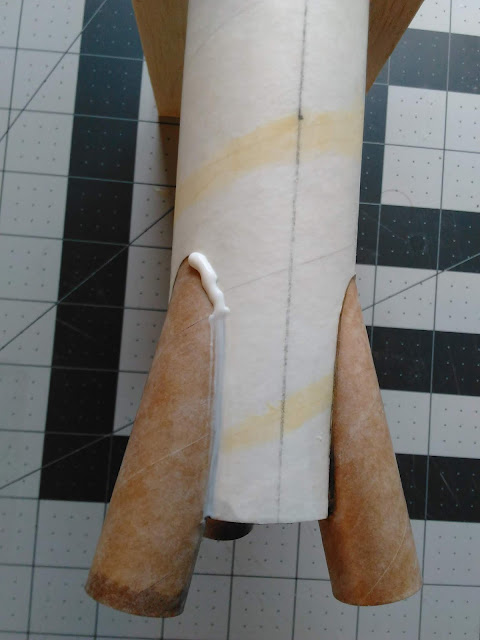 Finally, I flipped the rocket over, and attempted to smooth the last bit over the top end of the motor tube. My hope here was that with a few fillet layers, I could actually smooth that joint over, so it would look like the motor tube was simply a part of the body tube, like the branch of a tree, rather than having a sharp ridge where the tube was obviously poking through.

You may prefer to keep a sharp separation. It's an aesthetic choice. 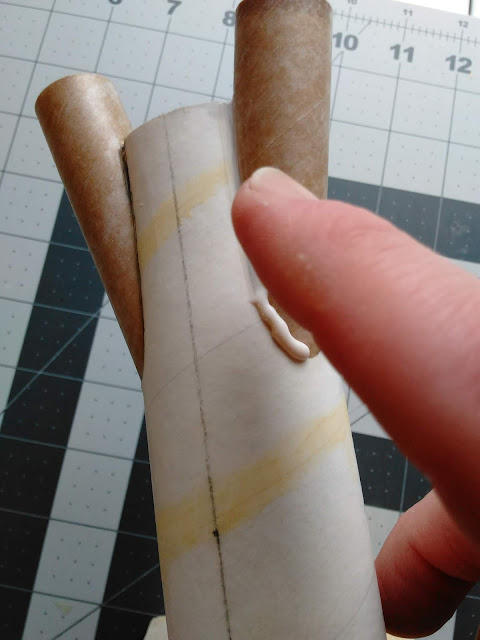 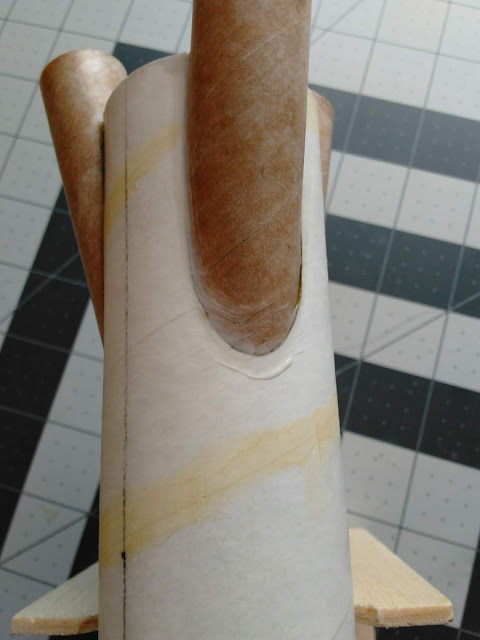 As you can see, there was a bit of excess. That's easily cleaned up by going over it with a clean finger. 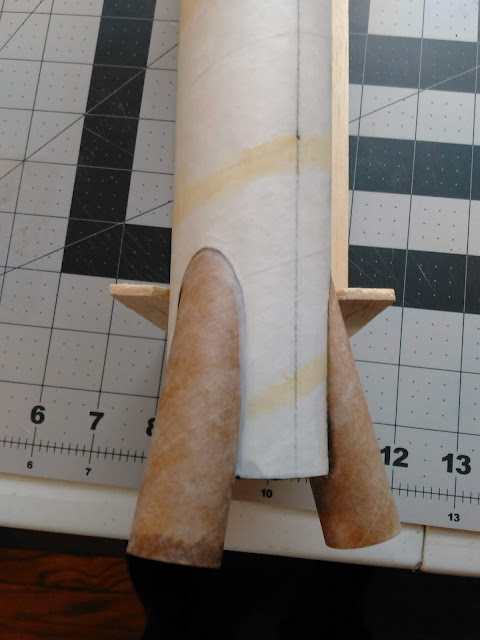 Allow the first fillets to dry, then do the other sides, allowing each to dry.

Don't worry if the glue shrinks slightly after the first fillet, leaving a little gap. Do another couple of layers and the fillets should not only close off any air leaks in the tube, but also look nicely rounded. This will show in the paint job. 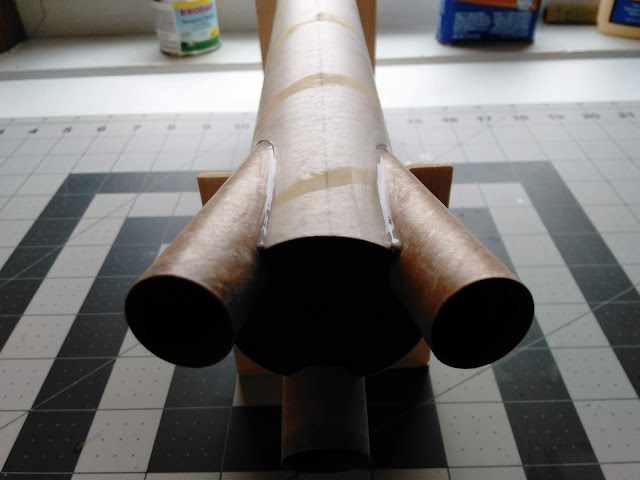 Next up, the fins. That's my favorite part of a build - it's when the rocket really starts to look like something!

Have a question you'd like to see addressed on this blog? Email me at iamtherocketn00b@gmail.com.
Posted by The Rocket N00b at 10:26 PM