Decisions To Be Made - Mid Power Rockets and Other Kits

As I mentioned yesterday, I have a build pile of 17 rockets, and I'm not sure where to begin. 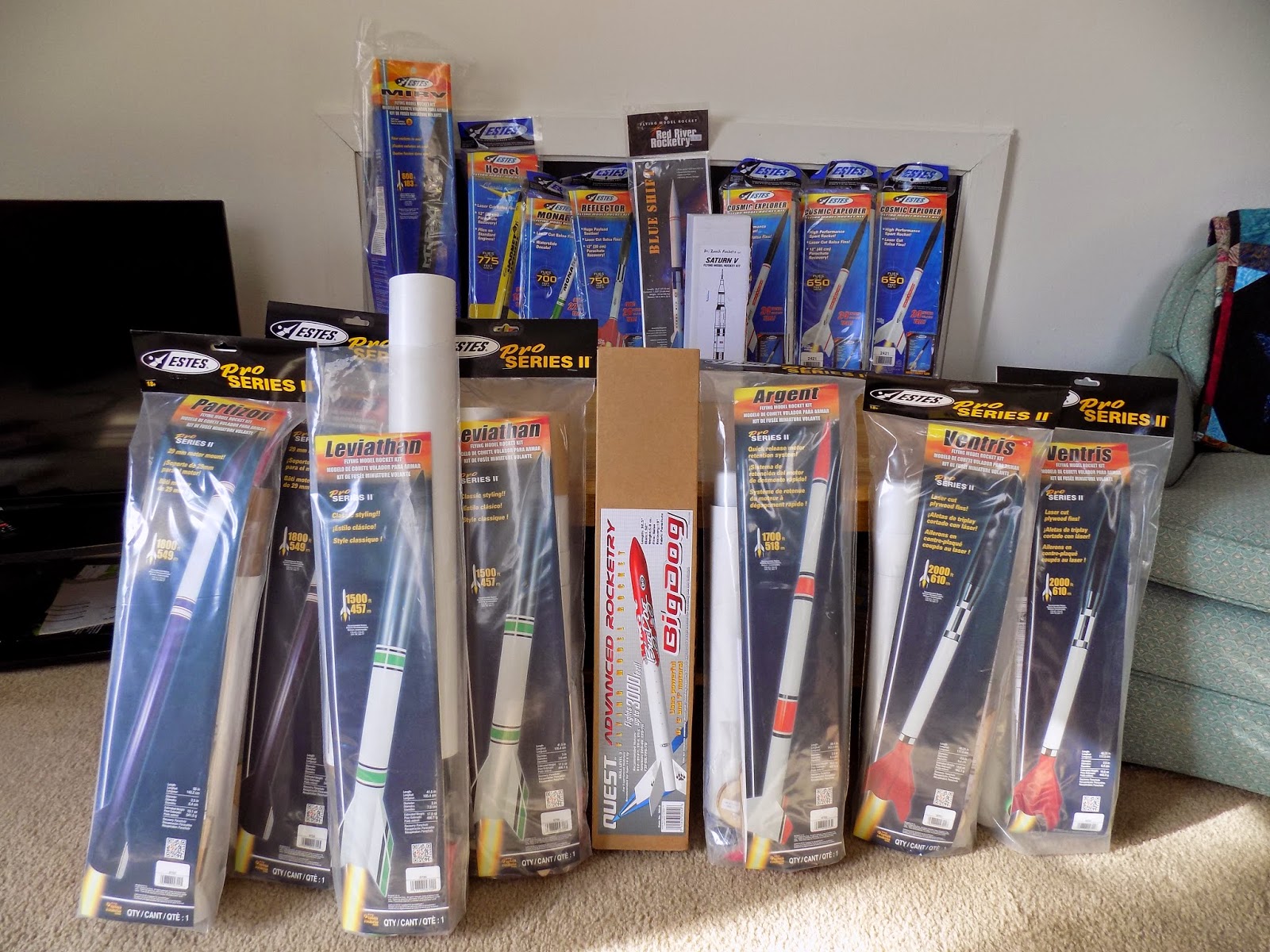 Truth is, I have a few rocket kits (8 of them) which require a little thought and planning before I begin. All the Estes Pro Series II and the Quest Big Dog (the whole front row, above) are considered mid power rockets. They all take 29mm rocket motors, which can be much more powerful. I want to transition into high power rocketry, and these bigger mid power ones are the key. The construction is not dissimilar from the low power stuff I've been building and featuring on this blog, but it's sturdier and with thicker materials. So this is where I learn.

But I have to decide, among other things, how I'm going to launch them, and therefore how I might alter the kits. These all come with traditional launch lugs for launching from traditional launch rods. But many mid power rockets and most high power rockets tend to use a launch rail these days - a slotted metal rail six feet long or longer, onto which the rocket slides, guided not by a straw-shaped lug, but by a launch button or conformal rail guide.

The Quest Big Dog is where I'd like to start, and before I do, I definitely need to make a decision, and figure out how to build it. 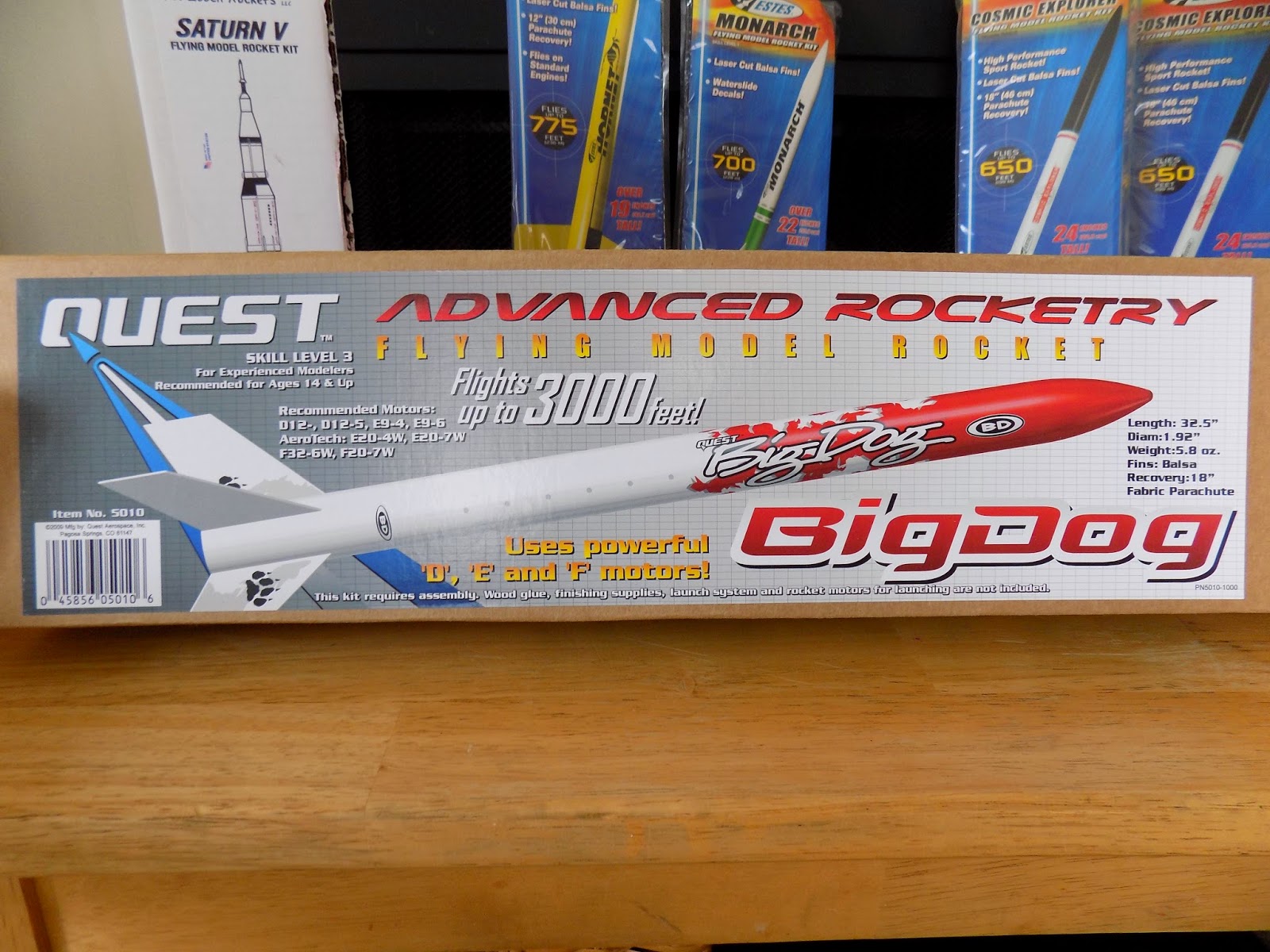 The Big Dog has a lanch lug which is sized for a rod no bigger than 3/16 inch, which is a pretty thin rod when you go up to an F or G composite motor. But rail buttons are best attached by screwing them through the airframe into a supporting piece of wood - often right into a centering ring, which in larger rockets are usually made of plywood. But the centering rings for the Big Dog are made of thin black fiber, so that's not an option. I'd need attach a small piece of wood on the inside of the body tube to act as an anchor. The airframe for this rocket is 1.92 inch in diameter, and I can't get my hand inside that, so I don't know how I'd get anything inside there.


Then there's the issue of making a launch rail. Most rocketeers seem to favor something called 10/10 slotted rail from an Indiana-based company called 80/20. They do, however, have thinner, metric rail, and there's a company which makes mini-buttons to fit a rail of that size. Now, I like the idea of smaller buttons and a thinner rail - I probably won't need anything huge for quite some time. But I don't know how common mini-buttons are, or when you'd need to upsize to a larger button and rail. If I only build a couple smaller rockets, is it worth building a mini-button rail, or do I need to go for the bigger ones?

So, there's that - what size rail do I want to use? Apart from that issue, there's also the question of building a rail launch pad. I've seen a few instructions online for simple pads - this one from the Apogee Components newsletter is pretty simple and cheap, but only points straight upward - you cant tilt it downward to load the rocket or to adjust your launch angle to compensate for the wind. Here's another good, cheap one which looks great - relatively simple and cheap to build, but the instructions are hard to follow for a n00b like me, and I had to Google a few things to figure out what the parts mentioned were. Metal nipple?? What is THAT?? I think it's a plumbing thing...

In the book I've mentioned many times, Make: Rockets: Down-to-Earth Rocket Science by Mike Westerfield, there's a low power launch pad which uses a drill chuck to hold a rod. It's adjustable, and takes whatever size rod you want to put in it. I think I could modify that to take a heavier load. If you look at that picture above of the rail, you see it has a hole down the middle. I think this can take a metal rod, but I have no idea what size - the manufacturer's website doesn't have that information - at least not where I could find it.

But I do have other rockets to build, which I guess I could start in the mean time. First, there's the Cosmic Explorer. I love this rocket - it flies so straight!

I got three more of them at the Estes holiday sales, and want to hack or bash the kit to take a larger, E-sized motor. But I'm procrastinating on that one. It has through-the-wall or TTW fins, and I'll need to trim them a bit to make them fit properly.


I have a couple of simple, Skill Level 1 rockets I probably wouldn't have bothered with if they weren't so cheap - the Estes Monarch and Hornet. Now that I have them, I have to admit, they are cute. These simple rockets might be a good next step, just to keep me working. But I want to build something bigger or more interesting. 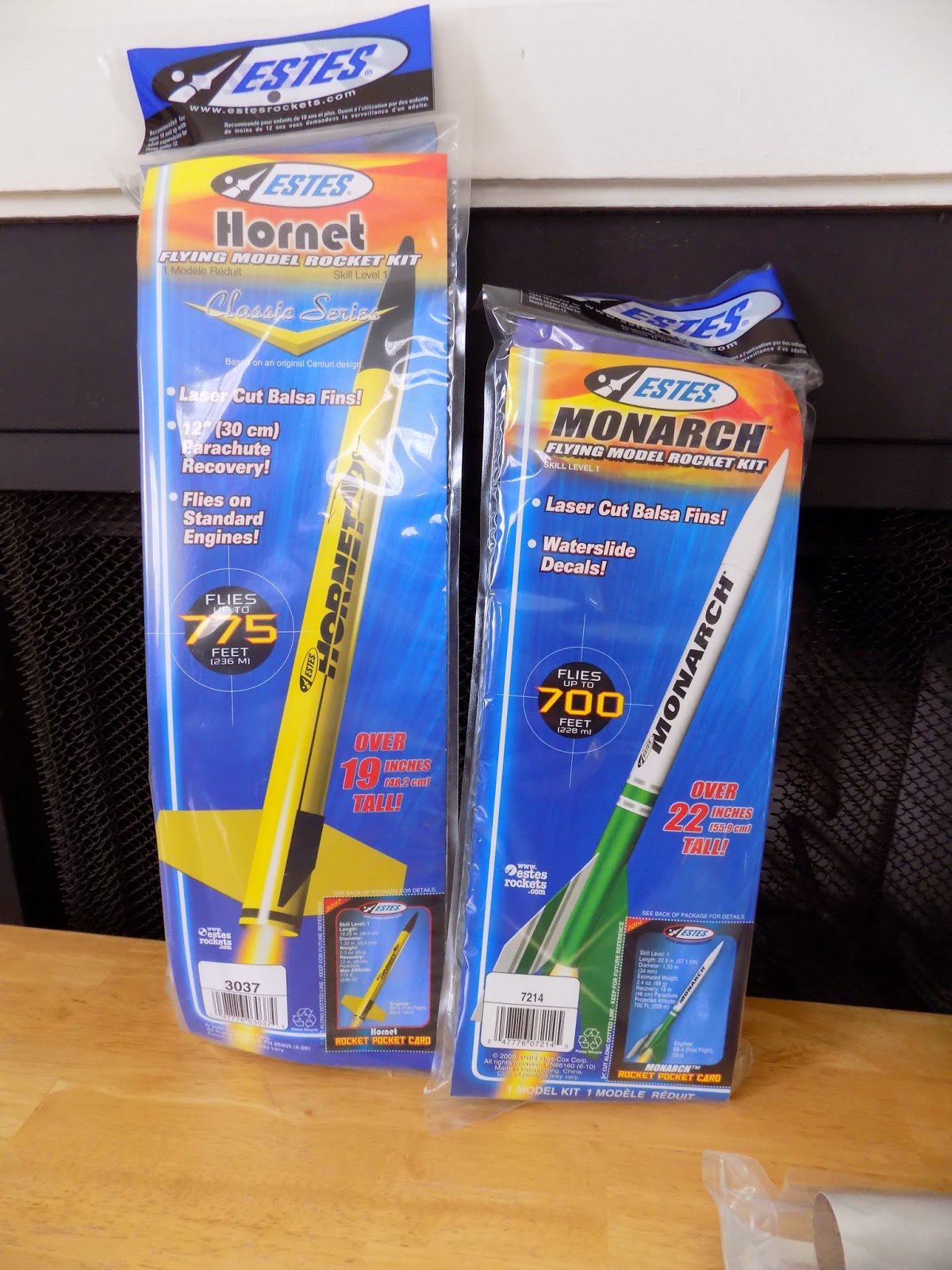 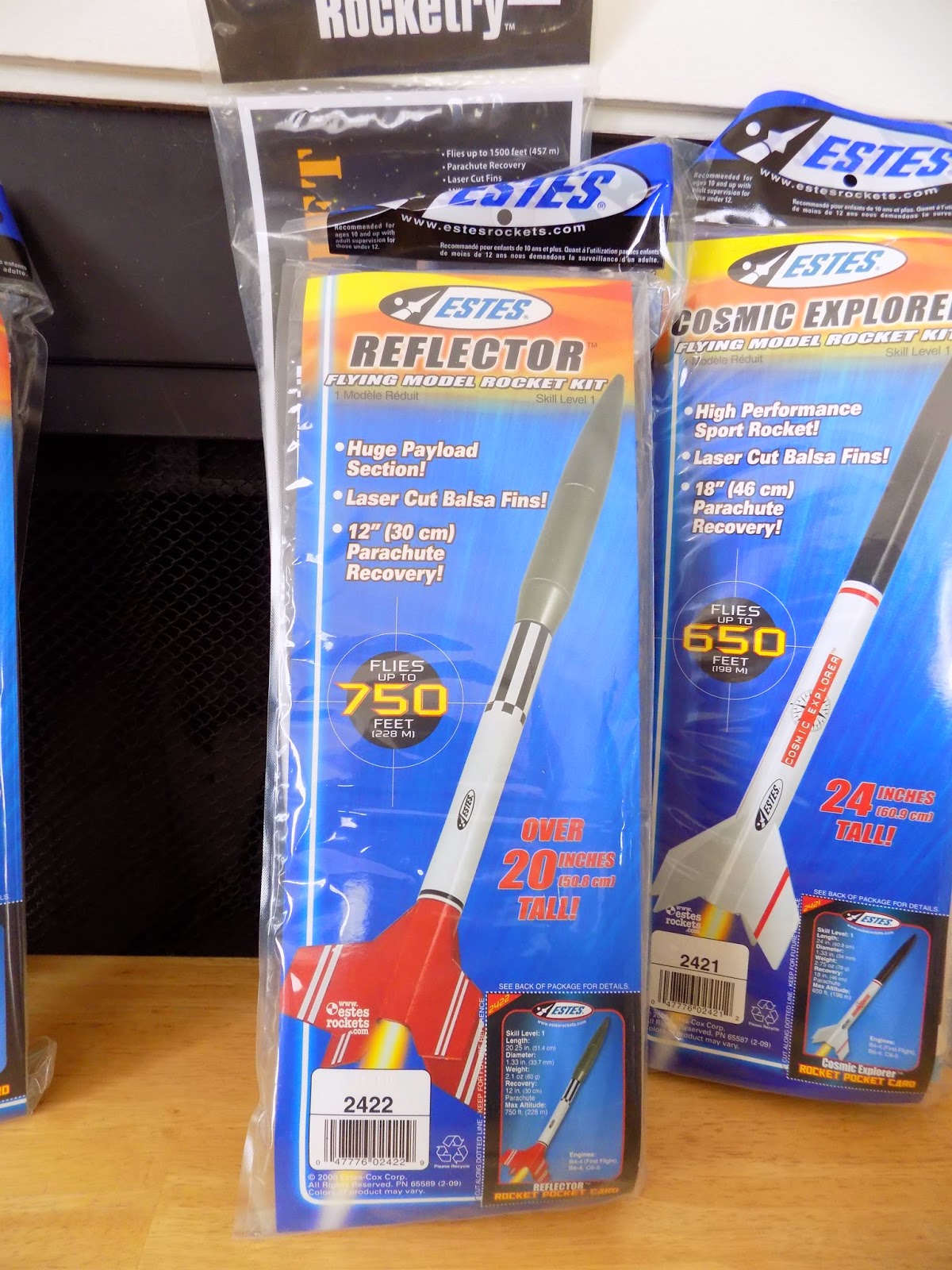 This is a payload-capable rocket, and the one used in this Instructables on adding a camera. I have the rocket and the keychain camera, but now that I have it, I'm nervous about taking the camera apart.

Then there's the MIRV. 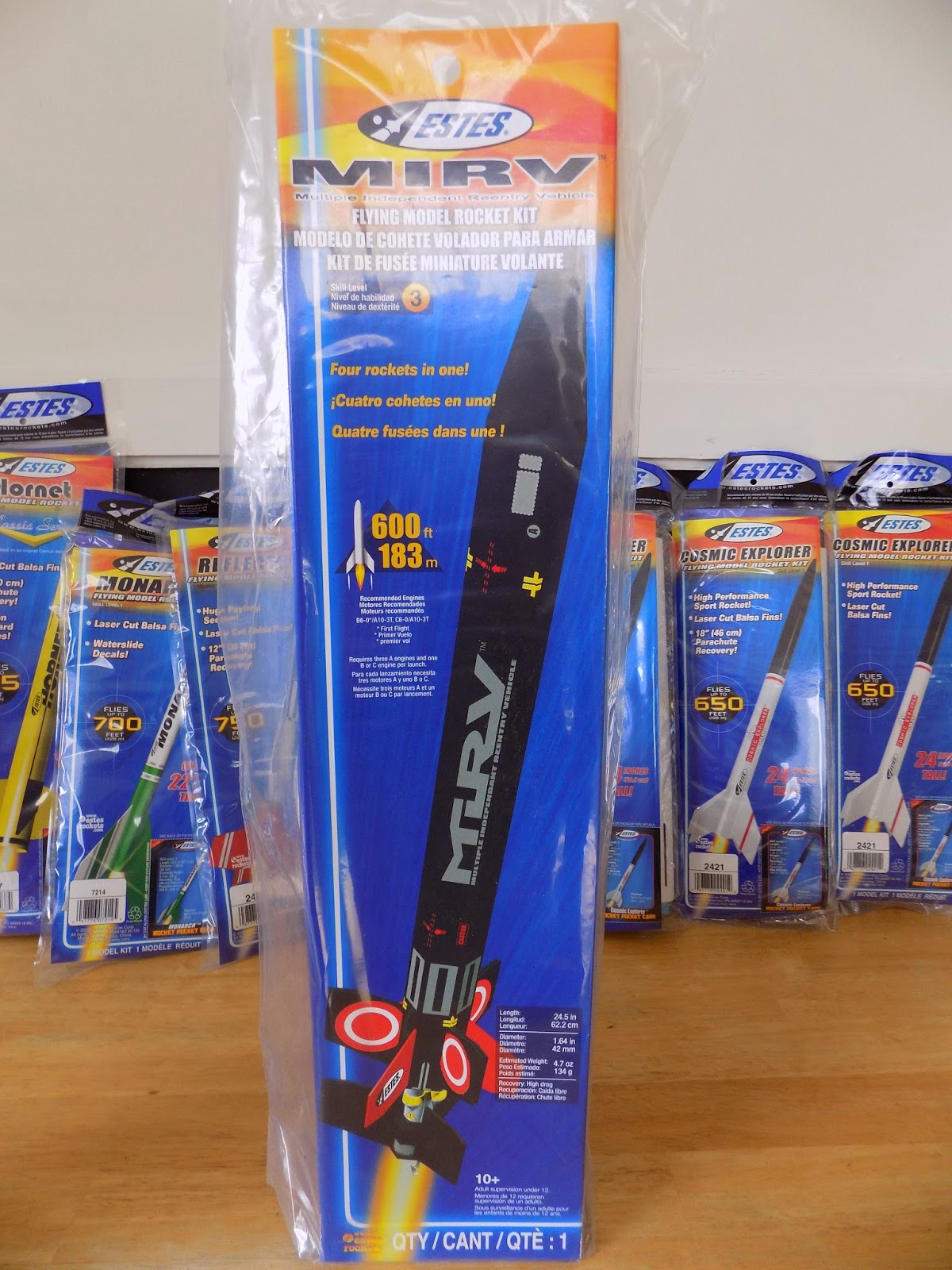 This is a very strange rocket, not only because of its shape. It's a two-stager. The first stage flies on one single motor, as you'd expect. But the upper stage splits into three separate rockets each flying on their own motors!

This is why I wish Chad were around more often. He's the only friend who I think would find this truly fascinating. Unfortunately for me, he's now splitting his time between Bloomington and a theater company in the Adirondacks.

Finally, there are a couple of rockets I'm excited about, but intimidated by. 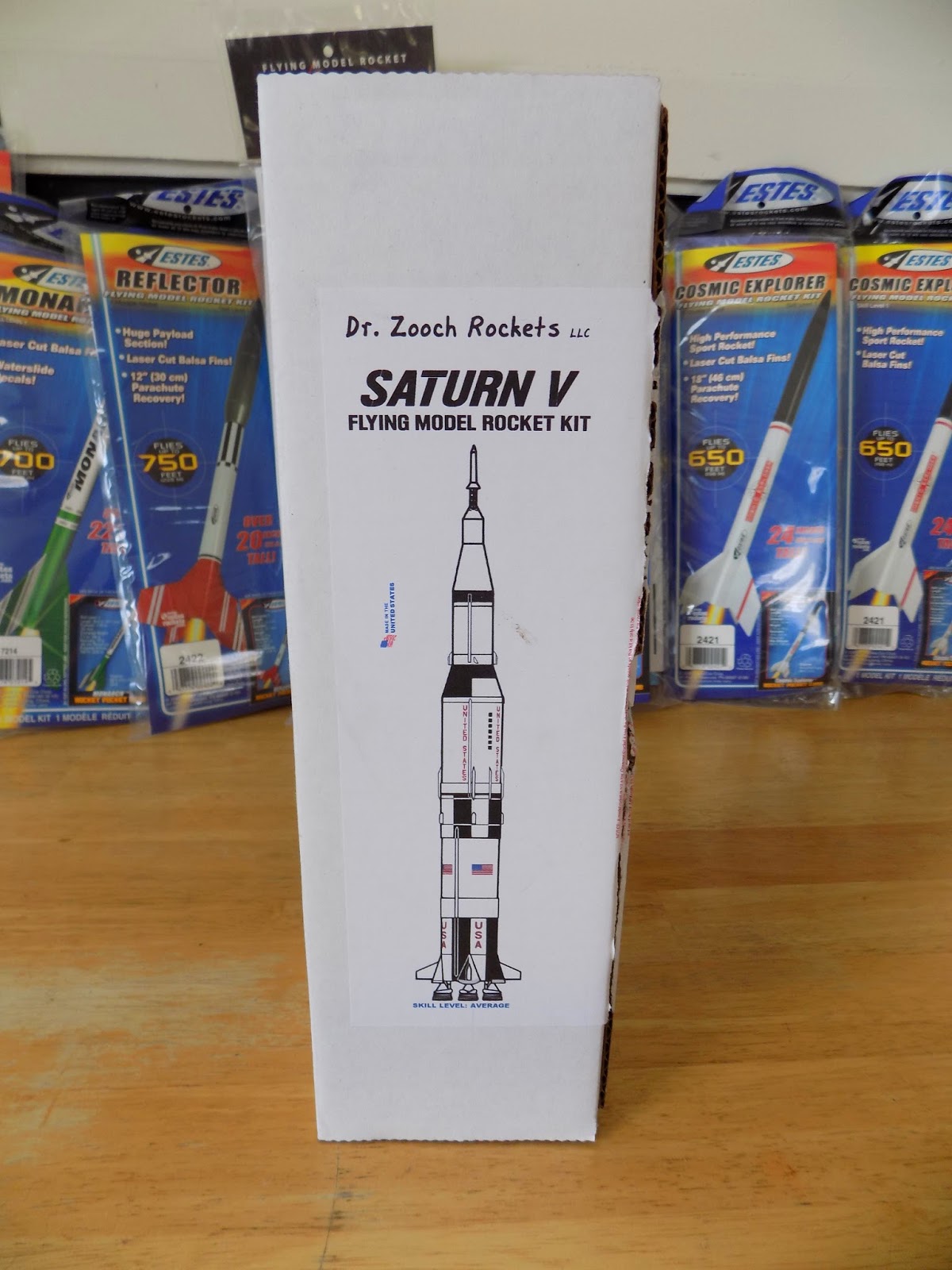 This "ant-scale" model is pretty complicated. Chris Michielssen does a beautiful job with his, but it requires some real finesse and dexterity to make it look nice. And that's the only reason I'd want to build this one. I'm nearly there, but... Making those "engines" is gonna take some patience and skill.

What's special about this rocket is that it's no longer in production - and this one right here might very well be the last one of its kind.

I first saw the rocket on Apogee, and thought it looked cool, and put it on my wishlist. But soon I discovered that Red River Rocketry no longer makes kits. I scoured the web to find one, and found two - from eRockets, through Amazon. I bought the second to last one - and it was lost by the postal service. I had to file for a refund through Amazon, and ordered the very last one.

This is just another rocket, but it's nice looking, has a few features I haven't built yet - and it's the very last one! I want to do this rocket justice, and not screw it up, which is why I haven't started on it yet.

I'm tempted to build it and not fly it - tempted, but of course, I will launch it. That's what rockets are for!

Still, somewhere out there, either in the back of a truck, in some other person's apartment, in a landfill (let's hope not), or in some postman's house is one more of these. Let's hope it's OK.